Tom Daggett, Co-ordinator of our community music programme SingSpire, blogs about a choir of marginalised people who made a wonderful sound…

Over four weeks in December, we worked with a remarkable set of men who came together as a choir and sang in Hinde Street Methodist Church for an audience drawn from across the West London Mission.

Since 1887, the West London Mission (WLM) has combined Christian worship with pioneering social work among some of the most marginalised members of society. The WLM works with Street homeless people, homeless ex-servicemen, men with alcohol dependency, men leaving prison, and those who need affordable counselling.

The Chaplain of the WLM, Revd Ruth Bottoms, decided to stage a Christmas showcase, drawing on the talents of men across the service. The event itself was held on Wednesday 17th December, and featured rap, original song-writing, storytelling, choir pieces, and plenty of congregational singing. It was an uplifting event not least because of music’s ability to unite us, despite different circumstances.

We had the pleasure of working with the Haven — a registered Care Home which is a sanctuary for 26 men with long-term alcohol dependency. The Haven provides a stable environment where residents can make positive changes in their health, well-being and personal lives. We were delighted to contribute singing to the Haven’s mix of enrichment activities. 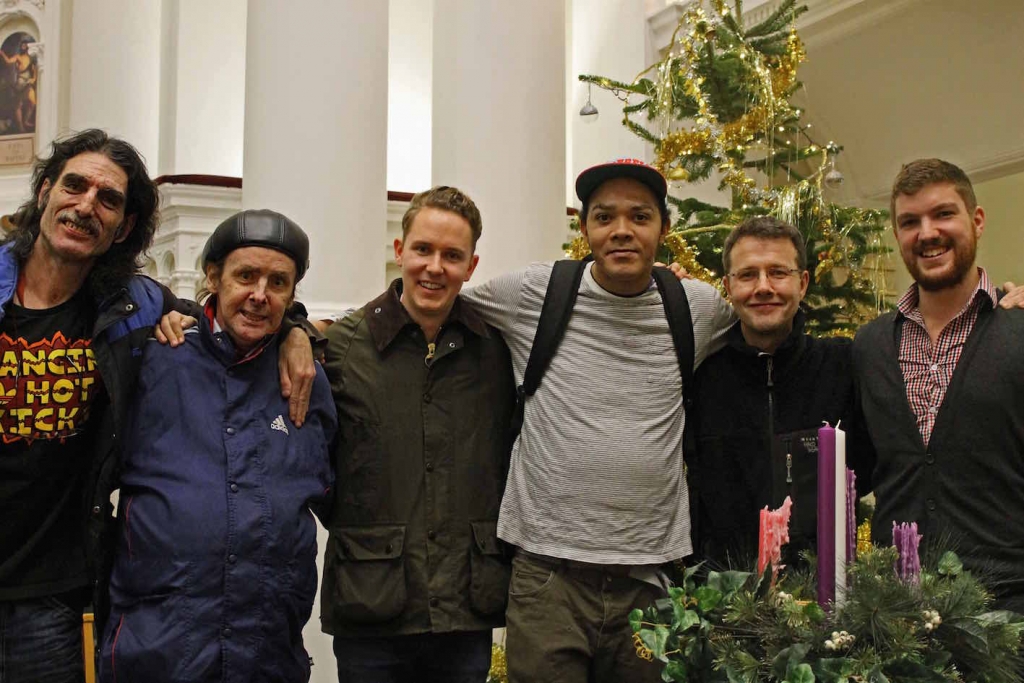 Singing together was the perfect activity for the Haven, as most of the men were unused to being in a choir, and felt united as a result (as did the staff members who took part). The community-building aspect of music and performance was seen particularly in the run-up to the showcase as the small group of men encouraged one another to practise in their rooms during the week, and focussed on making the event the best show in town! We’re grateful to one man in particular who acted as ‘Assistant Manager of the Choir’ and who did enormous amounts of legwork behind the scenes to keep the initiative going in the week; he also brought his keyboard down to the canteen for rehearsals.

One of the things that can be drawn from this is that people have hidden stories and talents. There was one gentleman in particular who had excellent musical training in his youth. When asked ‘What was the last thing you sang?’ he answered ‘As a treble, it was Mozart Requiem, with an orchestra’. When a smart phone was presented to him with the ‘Dies irae’, he sang along in perfect Latin, almost 25 years later.

There are lots of great organisations looking for musicians and artists to volunteer for them; why not become friends with some of the remarkable people who would love to get to know you too? The West London Mission would be an excellent start. If you’re interested, why not look them up?

One of the residents and a member of the choir, Iain, gave us this reflection of his experience: “The choir from the Haven gave a very cool ensemble of Christmas Carols at the extravaganza that was hosted by the Chaplain Ruth. The night was a great success with myself leading the choir. I had the pleasure of reciting White Christmas as a solo and then the other two singers in the choir sang and also finally everyone else in the audience joined in. I believe that it was a great success for those who participated from the Haven, we greatly enjoyed performing and listening to the other performers on the night. Thanks to Ricardo and Richard the other members of our choir and especially to Tom who helped us practice and was the pianist on the night. We hope that we can have a chance to work on a new project in the New Year.”

The Haven Choir was a recent initiative of SingSpire, founded in 2013 to help churches engage with their communities, through music. SingSpire helps churches bring people together, through music.

To keep Tom’s work going with WLM and others, we need your help. You can support SingSpire through the CTC community by visiting this page.