Isaac Stanley recently finished the year-long Buxton Leadership Programme. Here he reflects on his time in Parliament, and in a number of Hackney churches, and what it means to work towards a better world…

“Another world is possible.” In this refusal to accept the world as it is, what would it take to get to this other world? What would it look like?

The last year as a Buxton intern, where half my time was spent in Westminster as a Parliamentary assistant and researcher with Frank Field MP, and the other half in Hackney as a church-based community organiser, has given me a rich opportunity to engage with an important tension in how to reach this other, better, world….

David Graeber, social anthropologist and leading figure within the Occupy movement, sees that there are two ways. The first way is informed by a vision of a fairer, more rationally organised society. The second way seeks out the seeds of a better world, in institutions that exist, or have existed in the past. While often seen as opposing schools of thought, perhaps it would be easier to see them as ‘competing impulses,’ bubbling simultaneously below the surface of movements for change. If we want a better world, then, rather than throwing our all into one of these two impulses, it might be better to learn how to understand and manage the tension between them.

Westminster and Hackney are different worlds in many obvious ways. But even more interesting than moving between strikingly contrasting social milieus of elite privilege on the one hand, and inner-city deprivation on the other, has been the different political approaches to goals which are not, in the end, worlds apart.

The aims of my role in Westminster – seeking to bring the findings of science and ‘best practice’ to bear on the support services available to families facing social isolation and disadvantage – were not dissimilar in spirit to those of the Just Money campaign in Hackney. There, social corrosion caused by financial exclusion and consumer debt is rife, as the springing up of betting shops and payday loan companies along inner-city high streets shows.

Just Money has responded to this exploitative lending in two ways: firstly, by uniting a broad civil society alliance to campaign (successfully) for a cap on the interest charged by payday lenders, and secondly, by drawing on the social capital of community organisations to promote grassroots alternatives, notably membership of credit unions. These are a kind of financial mutual – community banks which draw on deposits to provide loans to members at low rates of interest, including many members from low-income households who would find it impossible to secure a loan from a high-street bank. 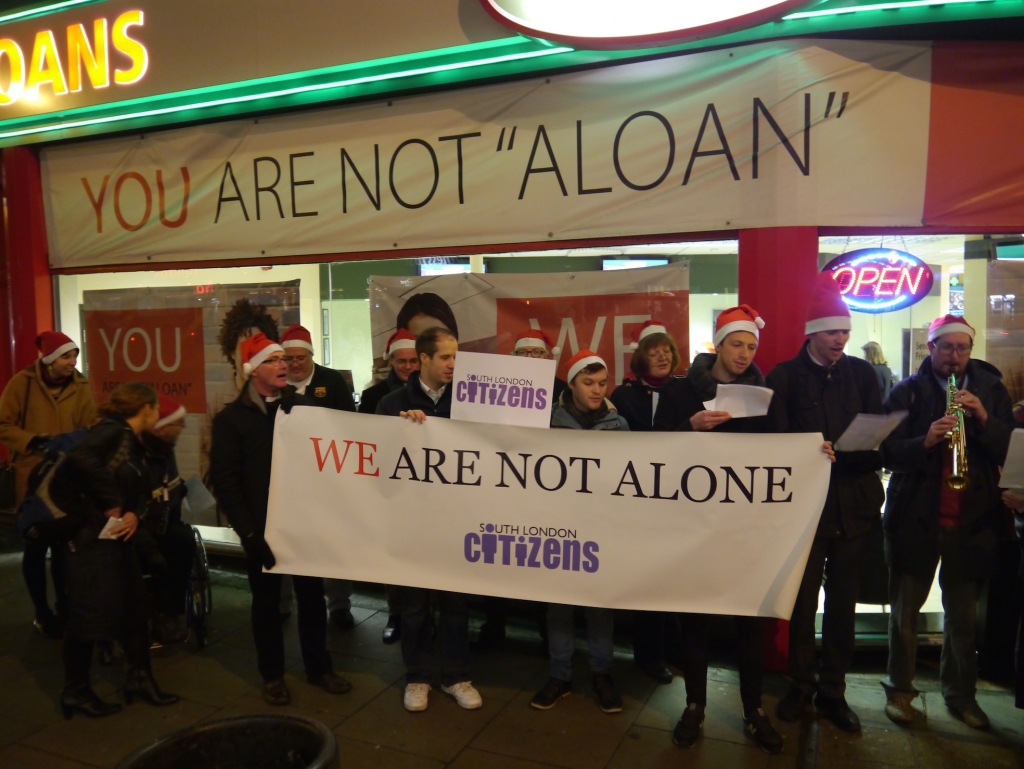 My work on this has been to develop a partnership between the London Community Credit Union (LCCU) and a number of churches in Hackney. In setting up Credit Union ‘access points’ in these churches, congregation members and other local community members are able to learn about its services, join, and make deposits, in a friendly space that promotes regular saving.

The LCCU is an example of a real-life community organisation in which we might catch glimpses of a better, fairer way of living together and sharing the riches of the earth. While its origins lie in self-help credit unions established by West Indian migrants to London in the 1950s and ‘60s, it has become an east London institution, with members of every creed and colour. What struck me was the way that these access points inspired a genuinely diverse group of people, both ethnically and socially.

Of course, if we simply rely on community organisations and institutions which already exist, many aspects of social injustice will be unaddressed. Credit Unions may meet some of the needs of the people of Hackney, but it cannot on its own undo the malign influence of the many unjust economic and political systems which impact on people’s lives.

Antonio Gramsci famously called for “pessimism of the intellect, optimism of the will.” We cannot be blind to the shortcomings of already-existing human institutions as solutions to the poverty and suffering we encounter in the world. And yet, at the same time, it is in these same institutions that we can observe a spirit of love and fraternity to which only the most jaded misanthrope could remain indifferent. We need both sober scientific attention to the wrongs of the world, and a hopeful and respectful attentiveness to those human institutions that offer us a glimpse of a better one.

Working out how to articulate these dispositions is, I believe, one of the great political challenges of our time. Having now come to the end of my time on the Buxton Leadership Programme, I am about to start work in two new half-time roles: community organiser on a Citizens UK project in Southwark bringing early intervention techniques to children’s centres, and research assistant with a Kings College London research team examining how to make mental health services more responsive to community needs. I am very hopeful that working on these projects will allow me to continue to explore the articulation between the two modes of political action I have been discussing, and continue to inspire me to explore what it means, and what it would take, to work for a better world.

To find out more about the Buxton Leadership Programme, or to join the Buxton 180 Club and support more young leaders like Isaac to take part in it, go here.