One of the Centre’s church-based Community Organisers, Daniel Stone, reports on the event that marked the end of his placement with ARC Pentecostal Church in Forest Gate, east London, and the beginning of the Charlotte Polius Awards…

In 2005, Charlotte Polius, was fatally stabbed while attending a friend’s 16th birthday celebration. Following her tragic death, members of ‘A Radical Church,’ chose to channel their pain by coming together with one voice to declare amongst their peers “STOP DA VIOLENCE”.

Through an annual anti-violence concert, school workshops and recording studio, the team of volunteers at Stop Da Violence have worked to promote a culture of peace and understanding within their community.

This year’s concert witnessed the launch of the Charlotte Polius Award, designed to honour individuals and organisations in the London Borough of Newham and beyond who are working to help young people in the community, especially those who could be in danger of being affiliated with gangs. The award winners were nominated by members of the east London community and were selected by a panel of three judges: Stephen Timms MP, ARC Pastor Peter Nembhard and Mary Foley, Charlotte’s mother. 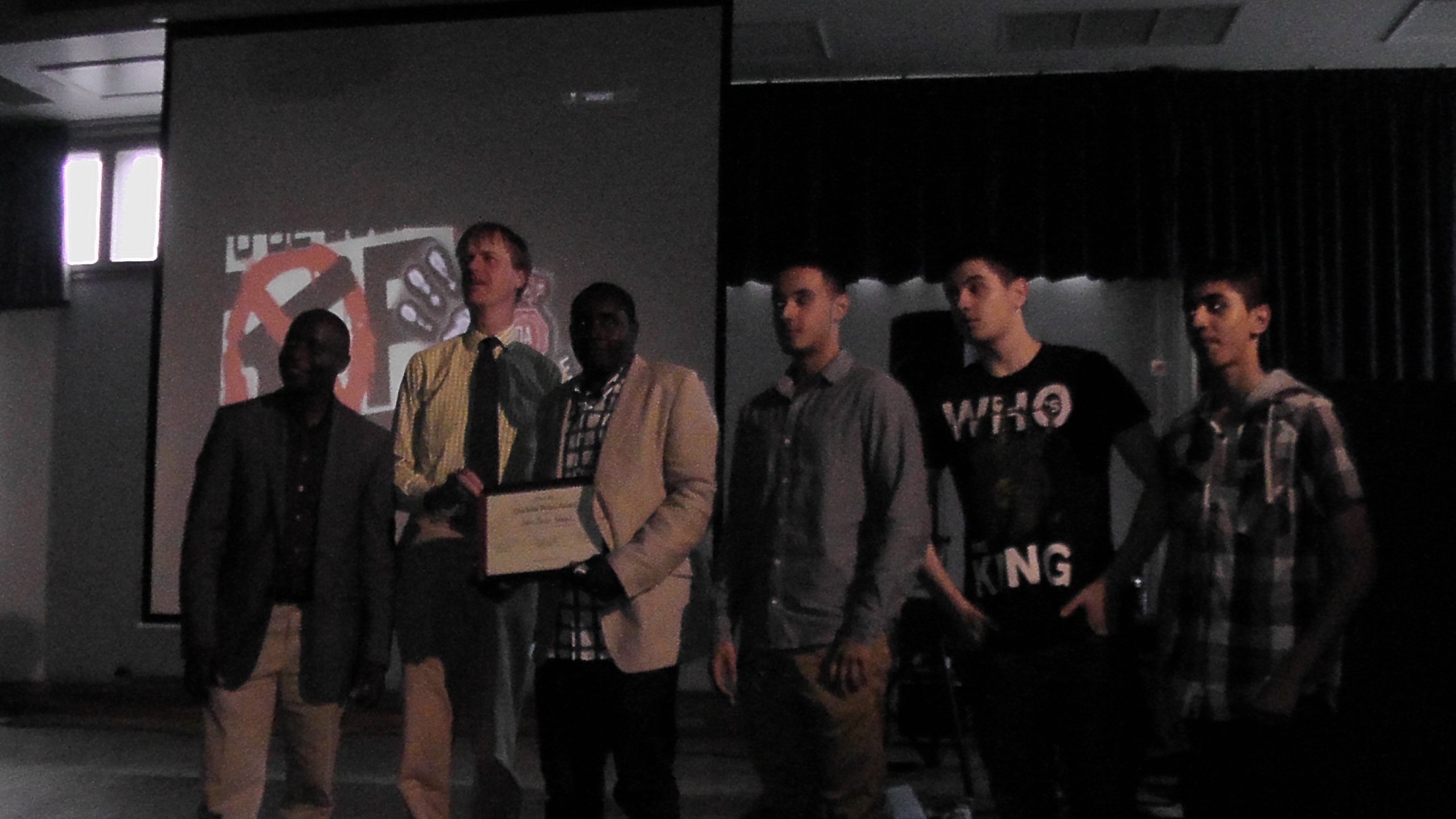 Throughout the evening there were a number of live spoken word, musical and dance performances from local young people, and the audience heard the heart-breaking and inspirational stories of families who have lost loved ones to violent crime.

The sisters of Samuel Adelagun and Champion Ganda shared what it was like to lose a brother, and Mary Foley spoke about her sorrow at losing her 15-year-old daughter, and the difficulty of deciding to forgive her daughter’s murderer.

Donna Parkinson closed the evening with a poem written especially for the Stop Da Violence concert:

How many more times will a youngsters life,

Trickle its way down the blood stained edge of a knife?

To form deaths’ red pool on the street,

How many more times does urban violence need to be laid at our feet,

Before we decide that the backseat,

Is not where we as a community ought to be.

We should be outraged by the rate of teenage mortality,

Yet, it seems that carrying a weapon is almost ‘accepted’ as a formality,

That’s just the way it is; it’s part and parcel of how the hoods blood has flowed,

Through the pulsating veins of the unwitting seeds we’ve sowed,

Our youths have transmuted into raging bulls that devotedly ‘represent’ their post code,

When they didn’t even choose their area of humble abode,

Our environment has raised a cohort of disenfranchised slaves to the road’,

All running on some futile self-destruct mode,

Underneath the surface of our inner city pavements,

So we will keep meeting at teenage funerals or anti-violence arrangements,

Until we find our voice,

Until we show our offspring that they have a choice,

Until we stand up and effect change,

Until we learn to rearrange,

The pecking order, all our children need is hope,

And to understand that there is scope,

To be who and what they want to be,

They are the masters of their destiny,

And this can be achieved within every community,

If we as adults take responsibility,

For our children’s prospects,

That will guide and nurture our youth,

Helping them to find their own truth,

Because the social realities for our childrens, children will be too ugly to comprehend,

If we as a community don’t teach them how to transcend,

Beyond the limits of their concrete confinements,

Or how to put their misplaced energy into their school assignments,

We must teach them that education is the key,

Knowledge is the power that will set them free,

And allow them to be,

Everything they ever dreamed they could be,

We need to make them see,

That they’re the voices of a bright new future not the ghosts of a violent past,

Their legacy must be one that will cast,

This vicious reign aside,

They can no longer be allowed hide,

Behind the shadows of fear,

The time is now…and the place is here,

Let’s fill the voids and bridge the gaps,

Together we can take steps to preserve our communities’ heirs,

I’m no expert, no revolutionary, just a mother that cares,

But I’ve learnt to not put off until tomorrow what can be achieved today,

Cause I don’t want my daughters yesterday,

To be her last,

I don’t want my child to be defined be another’s past,

I want all of our kids to o walk a positive path, full of opportunity,

And we can only achieve that if we join together as one community.