In this post Helen Moules from the Shoreditch Group recounts the highs and lows of the last year as the Hackney Foodbank has dealt with well over 1,000 clients. See above for a video telling the story of the foodbank.

The Shoreditch Group, a project supported by the Contextual Theology Centre, is an informal, ecumenical network of local church leaders who seek to collaborate, sharing capacity and resources to address needs, predominantly across Shoreditch, Bethnal Green, South Hackney and South Islington…

Local churches were galvanised by the desire to address food poverty in Hackney, based on the clear needs being witnessed by churches throughout the borough. The Indices of Multiple Deprivation, which draws together a range of deprivation indicators, ranks Hackney as the second most deprived Local Authority in the country. According to the Campaign to End Child Poverty, 44% of children in Hackney live in poverty. This is the third highest level of child poverty in England. With the profile and need for foodbanks gathering pace across the country, It was more a question of when rather than if a foodbank would open in Hackney.

Through the Shoreditch Group network, Hoxton Vineyard, Grace Church Hackney, Salvation Army Hoxton, St Matthias Stoke Newington, Church for the City and St Peter’s Bethnal Green agreed to take the lead in establishing a local foodbank in 2012, through a franchise with Christian charity, The Trussell Trust.

Hackney Foodbank is designed to help individuals and families living in crisis in the London Borough of Hackney through the provision of emergency food supplies. These supplies cover a family’s basic needs for up to 72 hours: the critical time gap before the social services safety net takes effect.

Around a year after Hackney Foodbank was launched, it has already fed over 1,500 people and partnered with more than 80 front-line professional care agencies and community leaders who are authorised to allocate food vouchers. These are given to clients experiencing hardship who attend one of two weekly foodbank distribution centres, currently hosted by St John’s Hoxton and St Matthias Stoke Newington.

Central to the vision and sustainability of Hackney Foodbank is the ability to work together and draw upon the the depth of compassion and practical voluntary support in
our local community. 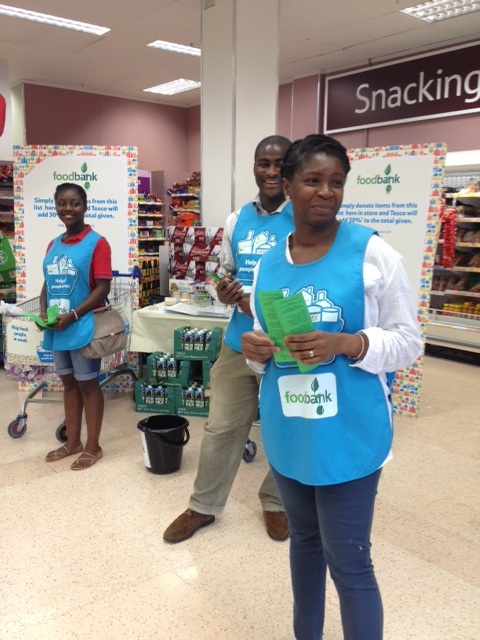 The day to day operation draws upon the time and skills of a wide range of volunteers from across Hackney. Since September 2012, over 60 local people from local churches and the wider community have volunteered, with approximately a quarter being first-time volunteers.

31 Churches, 15 Schools and children’s centres, 15 business and community organisations donated food during a harvest food drive and in the run up to Christmas. On an ongoing basis, countless people have participated in collecting for the foodbank or donated anonymously in supermarket collections (a two-day collection at Hackney’s largest Tesco branch yielded over 1.5 tonnes, contributing to more than 15 tonnes of food that the foodbank will get through in a year).

The Foodbank feeds people in a spirit of joy and friendship. More than giving parcels of food, Hackney foodbank provides a warm, welcoming place where people know they can be heard and feel empowered to keep on tackling the problems they face.

A London-based reporter for the New York Times London blog recently asked: “Why is it Christians who are always doing the most amazing things?”

A recent former client, Marie, said recently “you changed my life.” She came to the foodbank on the run from an abusive partner, who had brought her to the country 10 years ago and virtually kept her prisoner in their home. Having spent the night with her son moving from night bus to night bus to keep warm rather than return to her flat, she had nothing. Volunteers helped her with food, but also by referring her to a solicitor and a housing agency. It didn’t seem like much, but within a month she was re-housed and granted asylum, having gone from feeling near death to being filled with hope.

One recent client, Ryan, said  “I’m a really shy, independent person who finds it very hard to ask for any kind of help but the staff and clients at the Foodbank always make me feel welcome and they are always there to help people in need. I realised that sometimes people do need help and they should not feel wary about coming to the Foodbank and plus, they always leave a smile on my face.”

Patrick said, “Life in Hackney is getting harder as I’m finding it difficult to get employment…I feel like I am no-man’s land at certain times. The Foodbank is like a lifeline for people…like myself, or life would become unbearable.”

One of the most dedicated volunteers first came to the foodbank as a client. When his family arrived at the foodbank, they had nothing because of changes to benefits and his immigration status (his wife is a British citizen). Recently we have been able to rejoice with him about the arrival of his leave to remain as well as support him on his search for a job.

The foodbank has had a very positive effect on bringing the diverse church communities of Hackney together to work on a common goal. From Nigerian Pentecostal to Anglican and Catholic congregations, Christians have joined with people of other faiths and none to help build an organisation that looks like Hackney and feels safe and welcoming. At times though, it has been difficult to cope with the level of interest in volunteering and collecting.

Generally, members of local churches have reported that participating has increased their awareness of the difficulties faced by others and has made them more invested in the local community. Distribution centres linked to local churches enable the foodbank to integrate its work more closely with the community.  During the first session at St John’s Hoxton, a client was able to be referred to a holiday kids club the church were running.

The foodbank has also enabled the churches involved to share the core of their faith. One regular volunteer recently had a doctor’s appointment for a suspected tumour. She asked the foodbank volunteers pray with her before she went, and was very happy to report a clean bill of health, and was thankful for our prayers.

Already the impact of changes to the Social Fund and the welfare benefit cap are being felt. Hackney Foodbank is preparing to open a third distribution centre in Upper Clapton, followed by a fourth in central Hackney by the end of 2013 in order that the increasing number of clients in the greatest of need can more easily access a foodbank in their neighbourhood.