Selina Stone from CTC and Emmanuel Gotora from Citizens UK were present at a historic event in New York, as East Brooklyn Congregations (EBC) welcomed twenty new institutions into membership. EBC is part of the Industrial Areas Foundation, which developed broad based community organizing and is linked to Citizens UK and CTC. Selina explains what happened and why it was so important for community organising in the UK…

EBC is one alliance made up of 40 civil society institutions from four different neighbourhoods in east Brooklyn – a diverse area, just like east London. On the evening of Thursday 2nd June 2016, 1,500 citizens from EBC packed into Mount Lebanon Baptist Church in Bed Stuy. Vans arrived delivering dozens of senior citizens and church groups. Families arrived with young children and many passersby paused to see what was taking place. 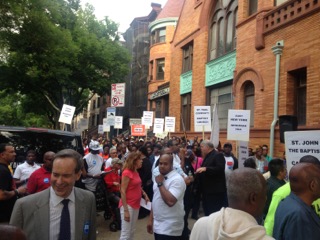 The atmosphere was electric from the start as new and existing members lined up in their groups with placards of their church, school, housing organisation or voluntary association. After a welcome by the church pastor, groups began filing in, as people began to mutter, concerned about whether there would be enough seats for everyone. As the main church hall and the overflow room both filled to capacity, people poured into the aisles and gangways to find a place to stand. 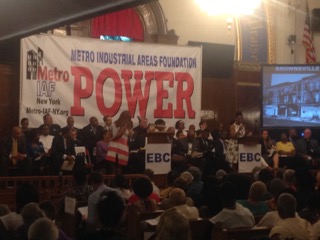 The evening was crammed with the energy, fun and excitement you would hope to find at a community event. We heard testimonies illustrating the challenges of housing and were surprised at how similar the issues are to what we face in London – especially in terms of gentrification. We were blown away as we heard the victories gained through the ‘Nehemiah Homes’ campaign. Having already built a total of 2,900 homes in Brownsville, East New York and New Lots, they are now building a fourth development at Spring Creek which will provide 1,525 homes as well as other community amenities.

The core business of the gathering was to welcome new members. The existing members did a ‘roll call’ and the crowd cheered loudly as the new members announced why they wanted to join, and the amount of their ‘dues’ which ranged between $3500 – $8000 (approximately £2400 – £5400). The new and existing members then stood in turn and made several pledges to each other which included the recruitment of new members, commitment of energy and the sharing of wisdom.

There were three things that stood out as being significant for community organising in the UK. As well as learning from the assembly, we had the privilege of meeting Mike Gecan, who gave us invaluable input from his years of experience as a community organiser in the USA.

Delivering 4,425 new affordable homes is a victory that most organisers may not even dream of, but it is this level of impact that proves community organising is worth being involved in. The number may be impressive, but it is even more crucial to recognise the focus and commitment that is required by leaders and organisers to make that happen. Mike explained that housing has been the ‘main thing’ for them; if we want a similar ‘win’ in London, we may have to re-think our focus too.

2) A strong alliance depends on developed leaders and deep relationships

The first thing I think about when I remember the assembly is the quality of leaders who were speaking, sharing stories and organising the event. At the International Symposium CTC hosted in London in April, Baptist Minister David Brawley had told us he saw himself as a leader/organiser, and we saw so many leaders act in this way. They did not only organise their institutions but they also took responsibility for organising other leaders and for holding each other to account. Relationships are truly central.

3) You have to be able to point to your victories not just speak about them.

Mike emphasised this several times, and it was also clear from the assembly that the leaders take this seriously. Recruitment and maintaining membership is as much psychological as it is political. People don’t just want to hear about what organising has done or can do, they need to see what has changed with their own eyes. Can we take people on a tour of our communities to show them what we have changed through organising? This is only one measure of success, but it is crucial that we can draw people in to an experience of change not just a narrative.

We wish EBC all the best as they continue the fight for the Common Good in New York and we continue to look to them for inspiration as we seek to do the same here in east London and beyond.