David Barclay, our Faith in Public Life Officer, blogs on another great week for our Just Money campaign…

The last month or so has been quite a time for CTC’s work on money – with action, success and new initiatives coming thick and fast!

Firstly, the Financial Conduct Authority announced the level of the cap on the cost of credit which will come into place from January. This will limit the amount that payday lenders can charge, and make sure that nobody will ever have to pay back more than double what they initially borrowed. This is a huge step forward in the fight against exploitative lending, and one that CTC has been calling for as part of Citizens UK since right back in 2009! On the Today Programme that day the Bishop of Stepney explained that those in the Church should celebrate this win without thinking that it will by itself solve the problems of debt and financial insecurity in our communities. He referenced CTC’s Church Credit Champions Network (of which he is the Chair of the Steering Group) as an example of how the Church is not just fighting against bad practice in the financial sector but also promoting more ethical alternatives like credit unions.

The next day provided the perfect example of the Network in action. For several weeks a dozen or so churches in Hackney had been talking to members of their congregation about their local credit union, and on Wednesday 12th November they came together to walk past the numerous betting shops and payday lenders that dominate their High Streets to present 134 credit union application forms! The action was the perfect launch for the 500 for Hackney campaign which is seeking to find 500 new members for London Community Credit Union in the next year.

Fr Rob Wickham, Area Dean of Hackney and one of the leaders in the campaign, said:

“Debt is a huge problem in Hackney, and destroys people’s lives. Every day I walk past payday lenders who are making profits out of the misfortune of many of our poorest members of society.  It is for this reason that I, and many churches across Hackney are working closely with the London Community Credit Union to offer opportunities for more affordable credit for all members of our society.  Working together is a mark of a healthy community, and this is an easy way of demonstrating this financially.” 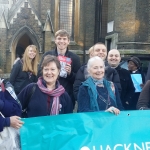 Christian Today covered the action, and made a video of participants explaining what they were doing and why.

The timing of the action proved particularly apt as news broke the same day of £1.1 billion of new fines on major banks for rigging foreign exchange markets. As well as once again highlighting the need for a more ethical and diverse financial sector, this news sparked discussion about how the Financial Conduct Authority’s fines should be spent. CTC’s view is that at least some of this money should be used to support the growth of the community finance sector, which in other countries gives many ordinary people access to affordable credit and savings but in the UK remains a tiny part of the financial landscape. That’s why we’re supporting the Just Money campaign’s proposal for a Community Finance Fund endowed through half of the FCA’s fines.

Supporting this proposal is one of a number of actions possible through the Church of England’s new ToYourCredit website, launched on Thursday 13th. Sir Hector Sants, Chair of the Archbishop of Canterbury’s Task Group on Responsible Credit and Savings, took to the airwaves to promote this new resource, and to talk about plans for savings clubs in Church of England schools. CTC is proud to be the main partner for the Archbishop’s Task Group on the ToYourCredit initiative, and look forward to continuing to play our part through the Church Credit Champions Network and the Just Money campaign.