Co-ordinator of our Buxton Leadership Programme, David Barclay, blogs on how we’re helping to reshape the way politics is done – and how you can join in!

Politics in the UK is broken. As politicians and parties vie for attention, a recent survey suggested that almost half the population is now so disinterested, they haven’t even registered that there is an election this year. Less than one in five of us now expect politicians to tell the truth, and most of us trust bankers and estate agents more than our Westminster elite.

But for Christians, politics is not something that can simply be given up as a lost cause. As the brilliant Show Up campaign has been arguing, engaging in public life is not an optional extra for people of faith but a core Biblical mandate.

So how do we try to influence a broken system for good? One way that we here at CTC have developed is called the Buxton Leadership Programme. Over the last two years the Centre for Theology & Community has been pioneering a unique programme which gives talented young leaders a year-long combination of experience of parliament alongside church-based community organising. This combination allows us to shape a different kind of public leader – one who understands how things work in ‘big P’ Politics but is rooted in inner city communities and the local church rather than being trapped in the Westminster bubble.

The stories of our interns so far speak for themselves. Rosina St James was told by her careers advisor at school in Croydon that she should give up on her ambition of going into politics and instead work in a supermarket. Now on the Buxton programme, she has had meetings with Cabinet Ministers and been invited to events in Downing Street whilst working for the Conservative Christian Fellowship. During the rest of her week she works alongside people affected by payday lending in Brixton, helping St Matthew’s Church to lead a campaign to get Speedy Cash to stop targeting its advertising at children. 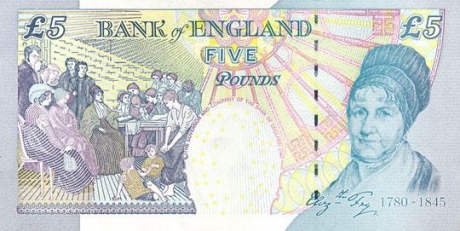 Thomas Fowell Buxton, seen on the left of the picture on the Five Pound note.

Why are we so confident that this programme can revitalise Christian engagement in politics? Because we know it’s been done before. The scheme is named after Thomas Fowell Buxton, the early 19th Century MP and leader in the Abolitionist movement. Along with Wilberforce and the other abolitionists, Buxton transformed the nature of politics in the UK through a combination of faith-based action in civil society along with focused energy inside Parliament. Petitions, campaign badges, ethical boycotts – all were invented by the abolitionists as they fought over decades to end the misery of slavery in the British Empire.

The abolitionists prove that a relatively small group of faithful and determined Christians can have an incredible impact when they cross the boundaries between Westminster and local communities.

The Buxton Leadership Programme is equipping a new generation to follow in their footsteps. But we need your help:

Help us recruit talented young leaders to join the programme. We’re always on the look-out for people with a calling into public life. If that’s you or someone you know, then go here and get in touch!

Host an intern. We are also looking for churches in London who might be interested in hosting an intern on the programme. Email the Programme Co-ordinator David Barclay at davidb@theology-centre.org to have a conversation about what that might entail.

Join the Buxton 180 Club. The Programme was launched exactly 180 years after Thomas Buxton’s motion in Parliament freed over 800,000 slaves in the British Empire. To keep alive his spirit by putting the Programme on a sustainable footing, we’ve created the Buxton 180 Club for people who are willing to contribute £180 a year (£15 a month) towards the costs of running the programme. Go here to find out more.

On 23rd March we will be hosting a Parliamentary reception for the Buxton Leadership Programme which will be a great chance to come and find out more. If you are interested in attending please email Programme Co-ordinator David Barclay.