It’s been an exciting week as we’ve been celebrating the 800th Near Neighbours grant to be awarded to a project bringing together people of different faiths in local social action. Near Neighbours in eastern London continues to be interesting and thrilling. It has been a privilege to have supported small organisations, faith congregations and groups of individuals as they develop local projects. Over the first three years, eastern London received over £500,000 in Near Neighbours grants which have supported creative projects – making a tangible impact. We are continuing this success in this second round of funding.

Recognising all the hard work that’s gone on here (and in other areas of the country) the Bishop of Southwark and the Secretary of State for Communities and local Government were among those paying tribute this week.

One question people keep asking, however, is how do we know if Near Neighbours is a success? It’s a good question and because this project is funded by taxpayers we need to make sure we have an answer. This means we’ve put in place a comprehensive set of measures and reporting. But we still find that nothing is better than personal stories. 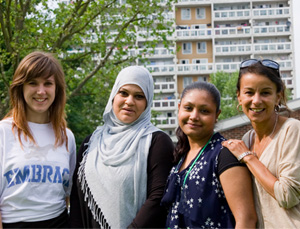 Near Neighbours projects like this one in Bow have brought people from diverse backgrounds together.

A couple of weeks ago we received an email from Alison, who had received a Near Neighbours grant a couple of years ago. She wanted to tell us about the deeper relationships which had formed as a result. Alison was concerned about a very diverse group of isolated mothers who left their children at the school gates and returned home to an empty house. With a Near Neighbours grant Alison and the mothers developed a programme of visits across London, to places of interest such as museums.

They became friends and enjoyed the freedom and confidence the visits gave them. Two years down the road Alison says in her letter that a number of the mothers are now personal friends and go to yoga classes and swimming together. The project has also enriched life for their children. During the holidays the mothers now buy weekly travel cards and take their children to the places in London they visited themselves. One mother took her children to a different museum each day.

This is just one among many lovely stories. We are very pleased that Near Neighbours is regularly hearing similar stories from other Near Neighbours areas as well as eastern London. We will soon be moving into the final year of this second round of funding. We look forward to supporting similar projects which will enrich the lives of diverse groups of people across eastern London.