The Centre’s Faith in Public Life Officer David Barclay blogs on his research project on Mulitcuturalism undertaken with Christian think tank Theos and the Contending Modernities programme of the University of Notre Dame.

He writes about the impact and attention the report has generated…

Making multiculturalism work has sparked comment and debate among politicians, academics and journalists. My thesis is that the way towards a sustainable ‘multicultural settlement’ is not through new theories or top-down policies but grass-roots relationships.

The Economist described the report as a “clarion call for ‘political friendships across difference’ in which people of various faiths and no faith form local coalitions to attain their ends.” Noting that the report “challenges some secularist thinking about broad coalitions” the article explored how ‘Making multiculturalism work’ was “plunging into” the “hard debate about the terms on which people of different religions and none can or should co-operate to achieve common goals.”

Launching the report in Westminster, the Rt Hon David Lammy MP described it as “a timely and important piece of work”, and said it was “refreshing to read a report that focuses on practical multiculturalism, moving away from theory and looking at how relational politics adds meaning to theoretical discussion of this challenging issue”. Professor Adam Dinham of Goldsmiths, University of London, argued that “anyone interested in the successful expression of multiculturalism in action should read this report and welcome it for the practical contribution it makes to a fractious debate at a crucial moment.” 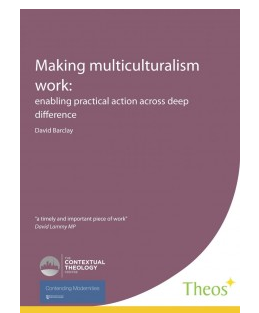 The Rt Revd Dr Michael Ipgrave, Bishop of Woolwich (where British soldier Lee Rigby was recently murdered) – also welcomed the report. He said that it “rightly contests the elitist view that people and organisations need to prove their progressive credentials to be considered acceptable as partners” and that it “points to a way of engaging which is more widespread, more invigorating, and more effective than any ‘-ism’: the core human practice of forming friendships.”

Professor Luke Bretherton of Duke University said “This important report presents a constructive way forward on one of the neuralgic issues facing contemporary Britain: how to forge a common life between different faith groups and people of no faith without demanding everyone abandons what they cherish about their way of life in order to do so.”