In this blog, our Development Director, Tim Thorlby outlines the challenges facing the new Prime Minister, and how things look from outside the Westminster bubble…

“I was the future once”

A rueful comment as another Prime Minister exits the political stage, knowing that his time is up. Such moments of transition are times of reflection. David Cameron’s time in Number 10 is already being analysed, with his initial hopes and dreams now being set against assessments of his actual legacy.

The new Prime Minister, Theresa May, in her first short speech outside Number 10, has already begun to lay out her own vision for the future:

“…we believe in a union not just between the nations of the United Kingdom, but between all of our citizens, every one of us, whoever we are and wherever we are from.

…That means fighting against the burning injustice that if you’re born poor you will die on average nine years earlier than others.

…and we will make Britain a country that works not for a privileged few, but for every one of us. That will be the mission of the Government I lead. And together, we will build a better Britain.”

Her vision is strongly pitched as ‘one nation’. It sounds good. It is also strikingly similar to the sentiments of some previous Prime Ministers. Consider this, from Tony Blair’s first speech as Prime Minister, delivered in 1997 – nearly 20 years ago:

“…For 18 years, the poorest people in our country have been forgotten by government. They have been left out of growing prosperity, told that they were not needed, ignored by the Government except for the purpose of blaming them. I want that to change. There will be no forgotten people in the Britain I want to build…

…Today there is a possibility of an alliance between the haves and the have-nots. Comfortable Britain now knows not just its own forms of insecurity and difficulty following the recession and industrial restructuring. It also knows the price it pays for economic and social breakdown in the poorest parts of Britain.

…To be a citizen of Britain is not just to hold its passport, it is to share its aspirations, to be part of the British family. But this new alliance of interests to build a “one nation Britain” can only be done on the basis of a new bargain between us all as members of society.” 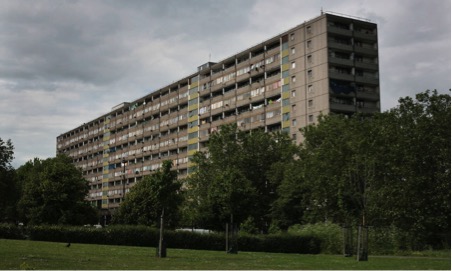 Tony Blair delivered his speech on the Aylesbury Estate, in Southwark – a rather grim, 1960s concrete council estate on the Walworth Rd. It provided the perfect backdrop to a speech dripping with optimism and hope.

What are we to make of the soaring rhetoric and inspiring visions of our Prime Ministers? What happens to these visions?

Perhaps the best place to judge the legacy of Governments is from the bottom up. Nearly 20 years after Tony Blair outlined his vision of the future on the Aylesbury Estate can we see what actually happened there? And can we learn anything from it?

I should declare an interest here, by the way. I have a personal connection with the Aylesbury Estate. For many years (in a previous job) I visited regularly, researching New Labour’s flagship regeneration programme, the ‘New Deal for Communities’, a decade-long £56m project which sought to deliver on the Prime Minister’s promise to its residents. I interviewed many of the people involved in the regeneration process and have followed its progress ever since.

The Aylesbury Estate was built in the late 1960s, with 2,700 flats providing housing for up to 10,000 people. Its architecture is brutal, with large concrete blocks separated by ill-defined public spaces. Yet at the time, it was heralded as ‘the future’. Perhaps it was. It provided affordable housing for tens of thousands of people just a short distance from central London.

As with most council housing estates, it has certainly had more than its fair share of problems since, although most of its residents get on with life. They tend to shrug off the grimmer labels which outsiders like to attach to their estate. In truth, it is neither heaven nor hell but just home.

The regeneration process has been long, convoluted and is still underway. After several false starts, the estate is now in the process of being completely demolished – bit by bit – and replaced with a mix of private and social housing. The original 2,700 ‘social rent’ homes will be replaced by approximately 1,300 ‘social rent’ homes and 2,700 private homes. Most of the scheme is being paid for by private investment – the sale of the private homes is what pays for the rebuilding of the ‘social rent’ homes and that is why there will be 50% less social housing – the land is needed for the private homes. This approach is currently the typical business model for regenerating council housing estates.

Rebuilding will probably take until 2032 and as one commentator noted “there will be nothing of the estate left except some of its trees.”[1] I was the future once.

As old visions make way for new ones, what can we say?

Firstly, that tackling poverty, exclusion and social injustice takes decades, not a single Parliament. Deeply entrenched social and economic problems are not amenable to simple or quick solutions. The Aylesbury’s ten year regeneration plan will actually take 30 years to complete.

Secondly, we need to focus on the people. There is a chance that the new Aylesbury Estate will be a more successful place than its predecessor – a mix of housing, better design, more services. But what about the people who were living there in 1997? With a 50 per cent reduction in social housing on the estate many will never be able to return. With social housing in the rest of London under serious pressure it is also not obvious where they will live when they move elsewhere. For many of these people, it is possible that they would have been better off if the estate had never been regenerated.

Successive governments have proved singularly unwilling to fund new social housing on any scale and so it slowly becomes ever more scarce; private finance will never be enough to deliver this kind of housing. It turns out that visions of social reform are actually very expensive to deliver. It is not enough to will the ends, one must also will the means.

London desperately needs some new visions to tackle its housing crisis and the poverty of so many of its residents. If our new Prime Minster really wants her vision to become the future, she will need to be prepared to ‘will the means’ to deliver it in a way which no Prime Minister in my lifetime has ever done. Her legacy is yet to be made.

So is ours. There is an urgent need for the Church, and civil society more generally, to stiffen the resolve of our political leaders to prioritise the funding of affordable housing. Private sector funding alone is not enough. Let’s play our part in “building a better Britain.”

CTC is keen to help churches think about housing policy. Our latest report on the issue, From Houses To Homes: Faith, Power & the Housing Crisis is available for free download here.