Our Director Angus Ritchie, who’s been involved in the Living Wage campaign for 15 years, blogs about this week’s £5.1 billion Premier League TV deal…

Richard Scudamore is a comfortable man, as well he might be. I imagine the Chief Executive of the Premier League on a more-than-comfortable salary, and he has just had a very good week at the office. The League has secured £5.14 billion in broadcasting rights from British TV companies, with negotiations still ongoing about international rights.

Mr Scudamore was keen to share the joy on Radio 4’s Today programme – enthusing about the way the money will be “redistributed” so that all kinds of people might benefit.  He became a little less comfortable when his interviewer started to get into specifics.  What proportion of the new revenue might go to the communities which gave birth to these clubs, and continue to support them loyally? And what about the Living Wage? Was it now time to look at the vast differentials between the pay of players and managers and that of the people selling the tickets, cleaning the stadium toilets and keeping the premises secure?

Apparently not. Scudamore tells us he is “not uncomfortable” with the current pay gap. “Not uncomfortable,” then, that many parents on low pay have to choose between having enough time with their children and earning enough money to look after them. “Not uncomfortable” that, while public debt is at £1.4 trillion, part of the welfare budget has to be spent topping up the income of football’s lowest paid staff.

Like many employers paying poverty wages, Scudamore responded by appealing to the legal framework. We’re paying the minimum wage, so (it is implied) we’re doing all that’s morally required. 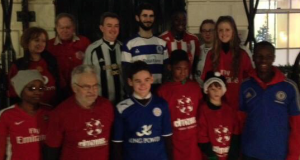 Let’s look at that argument in a bit more detail.

The minimum wage is set very carefully – so it doesn’t lead vulnerable businesses to have to cut jobs in order to make ends meet. Some economists who predicted it would cause unemployment admit they were wrong. But, as they correctly observe, there are limits to how high you can push the minimum wage without beginning to lose jobs.

The Living Wage is intended to complement, and not to replace the minimum wage. It is set at a higher level, and our campaign for it focuses on employers who can afford the extra wage bill without making people redundant.

When we launched the Living Wage Campaign, our first target was the financial services industry in Canary Wharf. The Wharf had received a huge amount of Government funding for its infrastructure, regenerating one of England’s poorest neighbourhoods. The local churches, mosques and schools in Citizens UK felt that some of this investment should benefit their poorest families. We thought the businesses in the Wharf could well afford it. And we were right – indeed, KPMG has now produced a report setting out the business case for a Living Wage. It shows the economic benefits of treating staff with dignity, not least in reduced employee churn, and hence reduced recruitment costs.

Citizens UK has a very clear position on all of this: employers who can afford to pay the Living Wage should do so. As more employers display the Living Wage Mark, and customers begin to favour them because of their ethical stance, we believe its economics can only get better. But it’s right that, unlike the minimum wage, the Living Wage is voluntary.

It’s here that Mr Scudamore and his colleagues need a little lesson in ethics. The fact that a rich empower can legally pay the minimum wage doesn’t mean that it is right. After all, no-one thinks that everything which is immoral should also be illegal. To take an obvious example, unfaithfulness to your partner is morally wrong. But if it was illegal, some of the Premier League’s best players would be spending their Saturdays in court and not on the pitch.

The moral case for the Living Wage is overwhelming. Premier League clubs can well afford to pay their caterers and cleaners a decent wage. As we face another five years of Government spending cuts, League employees shouldn’t need to have their wages topped  up by welfare payments. Until the Premier League agrees to pay a Living Wage, it is your taxes and mine that are making Mr Scudamore such a comfortable man.