Revd Dr Simon Cuff, Assistant Curate at Christ the Saviour, Ealing and a Research Associate at CTC blogs on the different Community Organising has made in just a year in his parish…

It’s hard to believe that it’s been a year since our first foray into the art of Community Organising. In September 2013, Andy Walton from CTC introduced the concept of community organising and led a listening session at our ‘Kids in the Community’ youth group. We listened together to the needs of our young people and their concerns about the local area. It was here that we first heard how our teenagers often felt unsafe travelling to and from school on public transport.

Fast-forward to the end of April this year, our young people had shared their concerns with those of students from the nearby William Perkin Church of England High School, and we were all gathered at a West London Citizens accountability assembly.  That evening, the candidates for leader of the local council were asked to do four things. One of them was to host and fund meetings with schoolchildren from across the borough and key stakeholders in public transport.

From that initial introduction in September to the accountability assembly in April, we had begun to explore the potential of community organising for our congregation and its ability to develop leaders in our congregation to deliver change. Parishioners went on a training day in one-to-one meetings so that we could begin our own ‘listening campaign’ to discover what issues we might present to the leaders of our local council before the local elections. We hosted an event at which all of Ealing Citizens voted on which issues to take forward to the local councillors, and we saw parishioners grow in confidence and leadership skills as they helped organise, present and chair the evening. 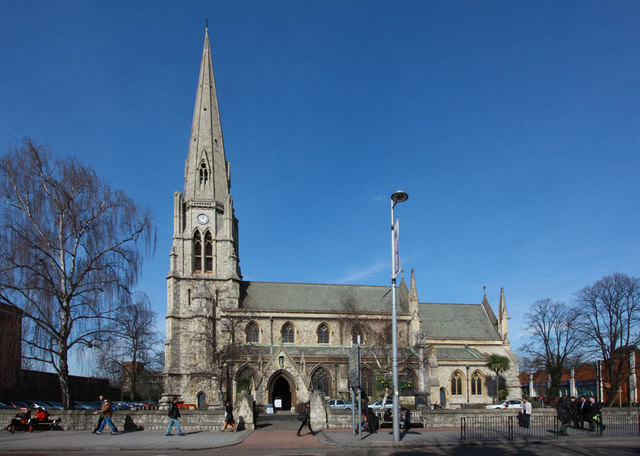 Christ the Saviour has a prominent position on Ealing Broadway

Having decided which issues we would take forward, parishioners met with the potential leaders of the council to discuss our ‘asks,’ helped organise the logistics for the accountability assembly, and were involved in the research and presentation of the asks themselves. At the end of the evening, we’d not only taken those initial concerns of our young people and presented them to our local politicians. We’d also grown as a parish both individually in the terms of the confidence and skills of those parishioners involved and collectively as a parish in terms of our appetite for social engagement and through the development of those individuals.

Even though this whistle-stop tour of the early days of organising in our parish takes us only as far as April, it skips over many important events in the life of our parish which have been enriched through community organising: our deciding to join Citizens UK in the January of this year, our attendance at the announcement of the new rate of the Living Wage during Living Wage week, our young people visiting Whitehall to hear the story of CitySafe, some of our leaders attending two-day training, and more besides.

All of this sounds incredibly ‘busy’, but a year on, we’re in the position to evaluate whether organising has contributed or distracted from our catholic mission. Our leaders are growing in confidence and the ability to articulate the relationship between their faith and the world. Leaders have been freed to focus on that which only they can do by actively seeking out and developing the leadership skills of those around them.