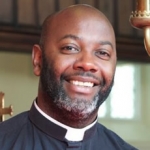 In last Sunday’s sermon, Fr Richard Springer (Rector of St George-in-the-East and Director of our Urban Leadership School) connected the “mundane” work of an annual church meeting with the power and joy of Jesus’ Easter victory.

+In the Name of the Father and of the Son and of the Holy Spirit. Amen.

It is sometimes true that when we grieve we are at a loss to answer the question that is posed by death. How can I go on as I was before?

Everything changes because this person is no longer here; and they are not replaceable.

And at the same time another question. Did I truly know them when they were here? Did we really have the relationship I hope we had?

Tough questions for suffering people in the aftermath of death, funeral and in the midst of grief.

It causes some wrongly to assume that Jesus’ appearances to his disciples are conjured from memories in the midst of such grief. Thomas fears he didn’t trust the Lord in life, so in a dream-like moment this story is imagined, restoring his faith and ours.

Jesus appears to his disciples. Because Jesus is resurrected from the dead.

And we stand forgiven by His Cross and His resurrection. And we rejoice as the disciples did when they saw the Lord.

Jesus says to them: “Peace be with you. As the Father sends me, so I send you.” He breathes on them. The breath of God on their skin – a warm entering of the Spirit in their lives. “Receive the holy spirit.” He says. Which is a warm up for the power of Pentecost when the room these people are in shakes to the rafters with the wind of God.

We serve a mighty God – and in Jesus Christ – that God wants to bless our lives. As those who choose to believe and are baptised in his name. But do we hover on the outskirts of this blessed life that Jesus has blessed those that love him with?

We follow in the steps of these ordinary and extraordinary men and women who first believed in faith and by sight and became the founders of the Church to which we belong today. That is your heritage. These men and women. Peter and Thomas and all the others.

We wrap ourselves up in the cloaks of our traditions and preferences but here we see that the beginning was a sudden and simple revealing of Jesus in the midst of gathered people.

Let that be our prayer this Easter. That God would stand in our midst as we gather in the precious name of Jesus.

Church does not begin as a set of rules, a special way of worshipping nor a particular way of conducting ourselves. Instead it is a particular focus on honouring the one King of kings and the one Lord of lords.

There are not two kings or two lords worthy of our praise. Only one rose again victorious. The human boundaries of sin and death have been broken and we can step through such pain into a newly created day in Christ Jesus.

When the disciples no longer feared the limits of sin and death they did wondrous acts in his name and become powerful people. Peter says to the courts of religious law, I am sorry, we are “to obey God rather than any human authority.”

Our lives are to be obedient pointers to Christ in,

But now our obedience has become participation with him, in his new life, after death, not just a pointing to his life.

So, we do acts of power in his name, not just talk about them happening in scripture or elsewhere. So, we pray for his kingdom to come in our hearts, not just imagine what it might be like if Jesus was the king of our lives. We participate with him in real time. And that is more important than human authorities. Even PCC’s.

He asks us to join him in his acts of power in the world. We turn to Christ as the baptised of the Church and we are met not by an authoritarian king who challenges us to do as we are told.

God in Jesus Christ shares power. Wonderful joy! We do not get any of his power, there is only one who has saved us, but we are given in us the limitless power of the Spirit. That same Spirit that was breathed on the disciples.

This is the destructive power Jesus died to overcome and trampled on by his hanging on a tree and his resurrection. And his wounds forever bear witness to this purpose and victory over power abused and wasted.

Like a scar always reminds you of that moment of pain so too Jesus’ wounds remind us of the pain he endured so we might be able to live through the pain of sin and death.

Jesus has those wounds not as a teaching point for us to learn about doubt and faith. Those wounds are there because God got hurt for you and for me. What and who do we reach out and touch as a sign of God’s pain and victory?

Let us pray that we will be people who will touch the wounds of Christ in one another, and in those we meet in our parish and lives. Let me be a doubting Thomas rather than a follower of Christ too pious or queasy to touch Him and know him as he truly is. Let us not grieve nor worship one we have not yearned to touch and know.

Our task today after this service is to elect new members of the PCC and some other official roles. They seem like mundane tasks. And they are.

As we’ve just read, they are not where the church started. So, our serious task in this year is for all of us to actively pursue the transformation that the risen Christ offers us in his blessing of peace and gift of power.

So that all we do feels less and less like our civic duty and more and more like the acts of believers who are close enough to God to reach out and touch him.