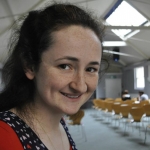 Molly Kemp spent a month as part of our summer internship programme. In this latest in the series of reflections on what the interns learned, she blogs about her placement at St Johns, Hoxton…

While studying chemistry at Oxford, I became involved with an organisation called Just Love, which aims to get Christian students involved in seeking social justice. Eventually I ended up on the committee running the Just Living project, which focuses on how we can change our lifestyle, what we eat, where we buy our clothes and what we pray about so that it is more just. So although I had spent a lot of time thinking, reading and praying about social justice, it had been quite focused on the individual decisions, the impact of which was hard to trace. I wanted to explore the way relationships within a community could be used to bring about structural change – exactly what this internship (and community organising) does.

I was based at St John’s Hoxton with another intern and together we were doing projects on credit unions and on road safety in the area. We conducted initial research by meeting people in the area and listening to their concerns and their stories. In our finance project, we discovered that payday loan debt was an issue that a lot of people in congregation were concerned about and so we hosted a garden party fundraising for Justin Welby’s Mustard Seed Appeal. We played a game where we printed out and laminated leaves with facts about payday lenders, the finance market and the Mustard Seed Appeal written on them, and hid them around the church garden. People had to find them, read out the fact and then stick them on an outline of a tree, demonstrating the parable – the mustard seed can grow to be one of the biggest trees in the garden.

In our road safety project, we discovered that many parents were concerned about cyclists ignoring a zebra crossing that was by the school. We met with the acting mayor of Hackney, hosted a coffee morning at the school to discuss these concerns further and headed to this crossing ourselves to see what it was like at 8:30 in the morning. Our vicar dressed up as zebra and acted as a lollipop person stopping the cyclists, and children from the local school joined us to hand out flyers and information to bewildered passers-by. Afterwards, we held a meeting between parents from the local school and the person in charge of road safety from the council to discuss the possibility of a lollipop person being placed on the crossing permanently. 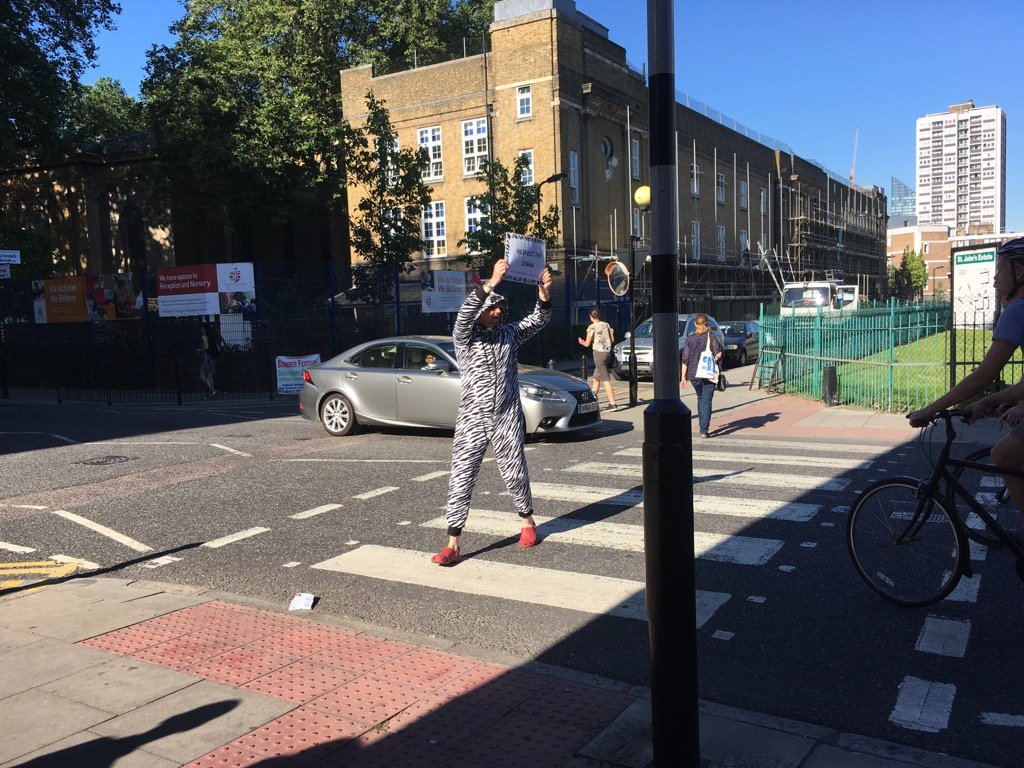 I’ve learnt so many different things over the course of the internship, both small things like how great the street food on Hoxton Street is or larger challenges to my thinking and perceptions as to how society works. While some terms in community organising theory such as ‘self-interest’ and ‘power’ still don’t sit completely comfortably with me, they have given me a greater understanding of how change can be brought about. I’ve learnt about the impact of stories both other people’s and my own, been challenged on how to be vulnerable and honest with someone in the first or second meeting without it becoming a pastoral chat and that social justice doesn’t always have to look super serious. Sometimes it can just be forcing your Vicar to dress up as a zebra on a warm summer’s morning.

One Response to Summer Internship Stories: Zebras and coffee mornings in Hoxton…