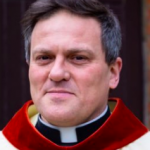 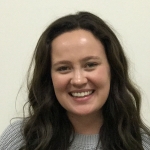 Fr Marco Lopes (priest at St Martin of Tours, Plaistow) and Frankie Webster (the community organiser working with the church on CTC’s Organising for Growth project) reflect on how Community Organising is helping the parish to “come in to its own” and “blossom.”

Not long ago, those who were lucky enough to find the church building open during the week would find St Martin’s Plaistow both a welcoming and a run down building – with an odd balance between a late 19th century red-brick looking style and early 1990s liturgical hardware.

Those who would gaze up would see a beautiful rood screen with the crucified Christ, the Virgin and the Beloved Disciple. Looking downwards to the right, what would stand out was a bulky font covered with blue mosaic – appearing somewhat like an old communal washing tank!

The church’s statues include two St Martins: one of Tours and the other of Porres; one white and the other black; one of European descent and the other from Latin America; one a bishop and the other a lay religious brother. This contrast speaks prophetically of the diversity found at St Martin’s on Sundays – where different church expressions, ethnicities, languages and social standings find a common place, dialogue and call this church their own. 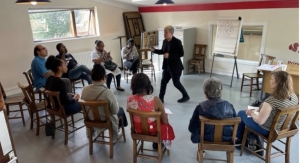 About two years ago, the church re-joined TELCO (The East London Citizens Organisation), having historically been an active member. With a desire to work more closely with our neighbours, challenge injustice, and grow the congregation, being part of an alliance of organisations of all faiths and none with a heart for justice seemed a good room for us to be in. Like many churches, coming out of the pandemic we felt the need to re-calibrate our sense of collective purpose and so, inspired by the methodology of Community Organising, and in partnership with  the Centre for Theology and Community, we initiated a church-wide listening process. This was co-led by lay leaders and myself.

We listened in one-to-one conversations, had exchanges during the sermon slot at Sunday eucharists, and in small group discussions. As a result, we heard about a desire for the church to be more rooted in the wider parish community, for a space for young people to lead and grow in their faith and as young citizens, for recognition and support for migrants and refugees within our congregation and beyond, for better working conditions, and much more. One particular quote stood out from one parishioner, which read:

“St Martins maintains the ground – it is a gem – a seed flowering, hidden but germinating in its space.” 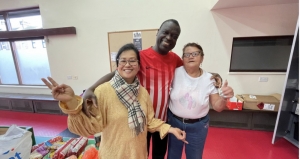 This contrast, of being “hidden”, a community coming into its own, blossoming but not quite within sight, is striking now on reflection, given what happened next.

Shortly after the listening process we heard from local parishioners that they had long hoped for a public permanent sign on the street pointing residents in the direction of the church. To grow the church they knew they needed themselves to be physically more present within and across the wider community. However, they also knew the building was not easy to find, down a residential road and blending in with Georgian houses. A sign would also symbolise a desire for recognition of the parish church, and its people. Something visible to signal we are here, all are welcome here. We heard too that the local mosque, Ibrahim Mosque, had also hoped for a public sign. What better way to be more rooted and build solidarity across the parish than to work together to win a sign for both institutions? In the coming weeks we will bring our parishioners together to negotiate with our newly elected Councillors for two new public signs.

A mystic man whose extraordinary faith was eventually acknowledged and celebrated by the Church, Martin of Porres experienced discrimination in his religious order and missed out on the training and ordained ministry provided only to white people and many of them of a wealthy upbringing. Today many of the Portuguese and the Spanish speakers, though part of the Church and manifesting a lively and energetic faith (and most probably because of it) experience a varying degree of inadaptation and face subtle resistance from long-established members who fear change and loss of control and traditions. Language, culture and ethnicity are at the root of this occurrence. The narrative found in some quarters of our society that blames foreigners for ‘stealing our jobs’ finds its equivalent in the Church where traditional worshippers say ‘they come to change the way we always have done things.’ Don’t get me wrong: there was great openness from the local church and from several people in leadership roles to welcome the luso-hispanic way of worshipping and serving God. But there is still work to be done to promote their full integration and for their gifts to be wholly used for the benefit of the whole body. We are going in the right direction but the journey is long.

Today as we celebrate the feast of Saint Joseph the Worker I am struck that St Martin’s church is full of saints not unlike Joseph. Ordinary citizens, with quite extraordinary stories of challenge, triumph over evil, many quietly working against the odds set against them. Like Joseph they are trying to provide for their family and making sure their children can have a future much better than their present marked by toil, low pay and ignorance of which doors to knock on to better their lives. Like Jesus’ foster parent, these are people in the background, unacknowledged  It is our hope, indeed our new parish vision to be “a place of welcome, freedom, acceptance and warmth, where you come as you are but leave fuller and more alive in God with a sense of having found a family”. Community actions like this are visible signs of that image of a flowering seed becoming ever more visible.