In this blog we here from Emmanuel Carriere, who is a member of the congregation at one of our partner churches – St Peter’s, Bethnal Green. The church has been involved in setting up City Safe havens in its local area. Emmanuel describes a recent event where people of all different backgrounds came together from churches, mosques, schools and other institutions involved in Citizens UK to ask for improvements in street lighting to make their community safer…

I am Emmanuel Carriere and I am 18 years old. I go to Cambridge Heath 6th form and St Peter’s Church in Bethnal Green which is a member of Tower Hamlets Citizens. I am involved in working for a safer borough because I want to see a positive change happen in the community that I grew up in and still live in.

The first time I was asked to get involved with the CitySafe campaign I was a bit hesitant to start. I didn’t really feel confident to go for opportunities that were handed to me. However, when the chance came again from Caitlin [Community Organiser at St Peter’s] I was really excited about it and a lot more confident than a year ago.

When I was in Year 7, I used to have trouble walking to and from school. There are some areas in Bethnal Green which feel really unsafe, and I would often take a different route home to avoid certain streets and parks. However, at the time I just dealt with it. I guess I didn’t really think anything of it – it was just normal. That was what life was. Now I’m working with City Safe I’m realising that I can actually do something to make it safer for younger children who are now in Year 7. I can use my experience to help them.

I think one of the biggest surprises for children here is the move from Year 6 to Year 7 [the transition from Primary to Secondary school]. In Year 6 you are used to your mum waiting for you at the school gate. When you go to secondary school and start going alone you begin to feel a bit more insecure. Some kids get taken to and from secondary school, which is good for them. But lots of them can’t. 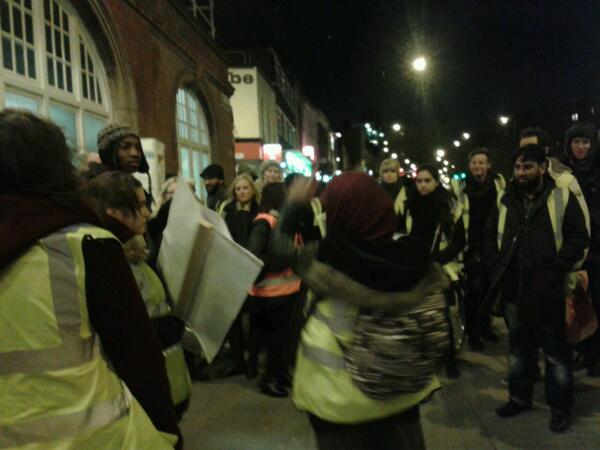 We did an event a few weeks ago with Tower Hamlets Citizens which was trying to do something about how dangerous it can be in the borough. The event was called ‘Shine a Light on Crime.’ It was a fantastic night where people from all over the borough, and of all different ages, religions and backgrounds came together to show that we care about safety. It was really inspirational and gave me the opportunity to speak in front of 90 people, including the borough police commander for Tower Hamlets, about my experience growing up here. I was especially happy to have people here from my 6th Form join in. I think we all felt proud to be representing Cambridge Heath. When everyone came together there was a huge amount of energy and enthusiasm.

We did a big march through areas which feel unsafe. One of the reasons is because the lighting is bad. We took torches and wore high-vis jackets, and when we got to the final spot we stood in a circle around the borough commander and Mayor of Tower Hamlets and told them stories of why we think it would be important to improve lighting and general safety in the borough. It was really exciting and inspiring to be part of it. It was awesome because some of us had never met before but by sharing these stories we felt connected.

The next steps from here are to find out more about issues and come to a final decision about what we want to do to make Tower Hamlets safer. We’ve already given the borough commander and Mayor maps of places where we want more lighting. We drew up the maps by listening to a lot of people so they are representative of the area. We’ll now talk about what went well, and what we could be better. It would be great to get the police even more involved in helping us address the issues, as well as asking more shops to become safe havens. It would be great to do this across the borough. I’m sure that when more people see how much work we’re doing they will be itching to join in!

In conclusion, it will be brilliant to encourage more people from both Cambridge Heath 6th form and St Peter’s Bethnal Green to get stuck in. We’re doing really well but having more people involved would be really helpful. Each and every person has a burning spirit for change and I know each one of them can make a difference in their own way. Being in City Safe is like a family. It’s so awesome being with lots of different people who all want to make a change, so I want our City Safe family to grow. You might be like me in the beginning and not very confident, but take that leap of faith and you will be so happy when you do. We have so much fun together, we can make new friends, and finally we can change the world.