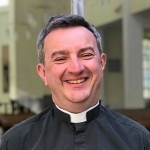 In the third of his blogs for churches preparing for Living Wage Week, our Director looks at Catholic Social Teaching and the Living Wage – and argues that this year’s celebration comes at a crucial moment in our common life.

At the start of the pandemic, Pope Francis spoke from an empty St Peter’s Square, in an Urbi et Orbi message that was streamed around the world. He observed that the pandemic was like the storm faced by Jesus and his disciples in Mark 4.

This storm, he said,

exposes our vulnerability and uncovers those false and superfluous certainties around which we have constructed our daily schedules, our projects, our habits and priorities. It shows us how we have allowed to become dull and feeble the very things that nourish, sustain and strengthen our lives and our communities. The tempest lays bare all our prepackaged ideas and forgetfulness of what nourishes our people’s souls; all those attempts that anesthetize us with ways of thinking and acting that supposedly “save” us, but instead prove incapable of putting us in touch with our roots and keeping alive the memory of those who have gone before us.

This time of trial, the Pope observed, is “a time of choosing.” Covid-19 was not the time of God’s judgment, but was a time that demanded that each of us made judgments. It was “a time to choose what matters and what passes away, a time to separate what is necessary from what is not…a time to get our lives back on track with regard to you, Lord.”

This time of trial and of judgment revealed the dignity and sacrifice of ordinary citizens – and in particular many of the lowest paid.

We can look to so many exemplary companions for the journey, who, even though fearful, have reacted by giving their lives. This is the force of the Spirit poured out and fashioned in courageous and generous self-denial. It is the life in the Spirit that can redeem, value and demonstrate how our lives are woven together and sustained by ordinary people – often forgotten people – who do not appear in newspaper and magazine headlines nor on the grand catwalks of the latest show, but who without any doubt are in these very days writing the decisive events of our time: doctors, nurses, supermarket employees, cleaners, caregivers, providers of transport, law and order forces, volunteers, priests, religious men and women and so very many others who have understood that no one reaches salvation by themselves.

So Living Wage Week 2021 comes at a moment of deep spiritual significance – as we collectively decide whether to act on what has been revealed to us in this pandemic. We came out onto front doors to clap for nurses, doctors and carers. Pope Francis’ words challenge us all: are we willing to turn to a different way of life, where our economy is placed at the service of human flourishing, rather than human flourishing being constrained by the tyranny of the market?

From this crisis we can come out better or worse. We can slide backward, or we can create something new. For now, what we need is the chance to change, to make space for the new thing we need.

Last month, we were honoured to join an online gathering of Popular Movements where Pope Francis spoke again about this moment of decision – for individuals, communities and nations

Together with the poor of the earth, I wish to ask governments in general, politicians of all parties, to represent their people and to work for the common good. I want to ask them for the courage to look at their own people, to look people in the eye… Let them stop listening exclusively to the economic elites, who so often spout superficial ideologies that ignore humanity’s real dilemmas. May they be servants of the people who demand land, work, housing and good living.

Living Wage week offers us an opportunity to respond – and in earlier blogs I have outlined some of the things a congregation can do and reflected on the readings set for the Sunday at the end of the week, the Feast of Christ the King.

Christians are sometimes criticised when they speak about the Living Wage and other such issues, as if they should stick to issues of “morality” and “spirituality.” Pope Francis offers us a clear response. For the response of both Scripture and the teaching of the Church is that the pay or workers is a moral and spiritual issue.

In the social teaching of the Church, including its teaching on just wages

the Good News of the Gospel takes concrete form on a social and cultural level. And it saddens me that some members of the Church get annoyed when we mention these guidelines that belong to the full tradition of the Church. But the Pope must not stop mentioning this teaching, even if it often annoys people, because what is at stake is not the Pope but the Gospel.

FURTHER READING: In an earlier blog for Living Wage Week 2017, Angus explored the teaching of Pope St John Paul II and Pope Emeritus Benedict XVI on a just wage and the dignity of labour