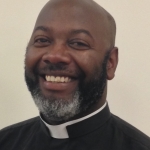 Last Saturday, Richard Springer inaugurated his ministry as Director of our Urban Leadership School and Assistant Priest at St George-in-the-East. Here he reflects on his first week with us…

It has been a long time coming getting to Shadwell. Not just because I was interviewed at the beginning of the year and licensed as Assistant Priest to the parish of St George-in-the-East some 8 months later – just last week in a wonderful service.

It’s been a long time coming since helping to look after a community of volunteers attached to a Christian youth centre on a west London housing estate. It’s been a while since I worked in Tower Hamlets on raising the aspirations of often overlooked secondary school pupils, on intergenerational storytelling projects, work with vulnerable women and then the men who exploit them as well as in a daycare centre and on interfaith dialogue. And it’s certainly been a time in the making since pursuing ordination to the Priesthood in the Church of England and seeking the right outlet to plug my experiences of faith and public life into.

The pioneering partnership between St George in the East and CTC, for whom I have now started as Director of its Urban Leadership School, is  developing just such a synergy between worshipping God, welcoming neighbours and challenging injustice and a great story is unfolding.

Through the Buxton programme, the Community of St George and the Summer Internship, the Urban Leadership School shines a spotlight on that meeting of faith and public life. And in its leadership development narrow the gap between the two. I am very excited about being a part of building up a School that teaches and learns about the impact that faith can have on our public life here in East London.

I have always enjoyed listening to people tell stories. Training as a psychodynamic counsellor taught me to listen to hear truths, to make and understand connections.  The story of an 18th century church our committed and passionate congregation and the work of CTC with organisations and churches transforming their communities, is one which reaches into a rich past, creates an energising present and promises an exciting future.