The Living Wage Campaign has had a huge impact on the lives of low-income families, putting over £200,000 extra in the pockets of people in poverty and helping at least 45,000 low paid workers and their families. From being dismissed as ‘impractical’ and ‘unrealistic’, it has now grown into a national movement supported by the leaders of all the main political parties, implemented by the Mayor of London, and recognised as having a robust business case by companies such as Barclays Bank and KPMG. Faith communities – and most of all churches – have provided the majority of organised local people who made the Living Wage possible. Christian social teaching is a key motivation for the campaign. The Bible is clear that the earth belongs first of all to God – and that its fruits need to be distributed in a way that ensures everyone has dignity and the material as well as spiritual means to flourish. It is also therefore a central theme in the social teaching of the Catholic Church – and is emphasised in Pope Benedict XVI’s his 2009 encyclical on social justice.

Your church can get involved in Living Wage week in a number of ways:

1. Preach on the Living Wage: Later in this blog, I will look at the lectionary readings for All Saints’ Day, which many churches keep on either the Sunday or Tuesday of Living Wage Week.

2. Get testimony from low-paid workers in your congregation: There is no substitute for personal experience. Story is the main genre of Scripture – and has always been central to the success of the Living Wage Campaign. Is someone in your church is willing to speak or be interviewed about life on poverty wages, or the positive impact of the Living Wage? Alternatively, a member of your congregation – or a community organiser from Citizens UK – could speak or be interviewed about the stories behind the campaign, and how it has succeeded.

3. Say ‘thank you’ to a Living Wage employer: Community organising involves tension and struggle – but we also recognise and celebrates success. Some employers who were once resistant to the Living Wage have now become powerful voices for its positive impact. Contact your local Citizens UK organiser and find out which local employers your congregation can thank. This can be by sending a letter on behalf of the church – or even getting members of the congregation to write a ‘thank you’ postcard. Experience suggests this can be done most effectively, and quite speedily, while the congregation is still together. Why not distribute postcards – and supply some pens – during the notices? You can collect the cards in and post them in one batch.

4. Map low pay in your community: Think of appropriate ways to engage your congregation in this research – making it as conversation-based as possible – after all, we are keen to build relationships as we go! Find out whether your local council is paying the Living Wage. If so, say ‘thank you.’ If not, ask ‘why not?’ 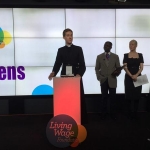 Many churches will keep either Sunday 30th October or Tuesday 1st November as All Saints’ Day. On the feast of All Saints, we remember the great company of people who followed Christ on earth, and now see him face to face. Some saints are well-known to the whole church; some may have a particular personal significance – inspiring and challenging us; some will be unrecorded lives of faithfulness which are known to God alone. This “great cloud of witnesses” surrounds us as we journey on. It shows us that the power to change our world comes when we act together – one Body, united across time and space. For the power of the saints lives lay, not in being superheroes, but part of this Body.

God calls us to be saints not heroes. We do not stand at the centre of the story. We stand, as members of the Body of Christ, around a story in which Christ is central. The words of the Beatitudes (Matthew 5.1-12 or Luke 6.20-31, which are set as the Gospel reading for this feast) remind us that God chooses to work most powerfully through the very people wider society ignores, belittles and judges. Those without earthly status are often more aware of their need of God – and of each other. The Living Wage Campaign is an excellent example of what we can do, not by acting as individual heroes, but by harnessing the power of common action. Achievements that would have seemed unimaginable when the Living Wage Campaign began have resulted from a willingness to join hands and act together, both within our churches and beyond their walls.

– the right to exist and progress as a family, that is to say, the right of every human being, even if he or she is poor, to found a family and to have adequate means to support it;

– the right, especially of the poor and the sick, to obtain physical, social, political and economic security;

– the right to housing suitable for living family life in a proper way;

– the right to expression and to representation, either directly or through associations, before the economic, social and cultural public authorities and lower authorities;  the right to form associations with other families and institutions, in order to fulfil the family’s role suitably and expeditiously;

– the right to emigrate as a family in search of a better life.

In Caritas in Veritate, Pope Benedict XVI wrote that the dignity of the individual and the demands of justice require, particularly today, that economic choices do not cause disparities in wealth to increase in an excessive and morally unacceptable manner. And Pope Francis expresses the same thought which characteristic simplicity and clarity:

“Not paying a just wage, not providing work, focusing exclusively on the balance books, on financial statements, only looking at making personal profit. That goes against God!”