CTC Director Angus Ritchie was one of the founding leaders in Citizens UK’s Living Wage campaign. Here he reflects on what has been accomplished – and how churches can get involved in Living Wage Week, November 1st-7th…

The roots of the Living Wage campaign are here in east London – where leaders from churches and mosques, schools and trade unions in TELCO (the local chapter of Citizens UK) met to work out how to tackle low pay together. The issue of poverty wages had come out from listening campaigns in their organisations, with many stories of parents having to choose between earning enough money for their families and having enough time for them.

For Christians, economics is in the end a question of stewardship. How do we use the resources God has given us to enable all his children to grow into “life in all its fulness?” (John 10.10) Fulness of life involves having time for relationships – with God, with our families and with our neighbours. Poverty pay makes this impossible – because workers have to take second and even third jobs.

The campaign shows what it means to be a powerful church of as well as for the poor. Inner-city churches have been at its heart – as we began to win a Living Wage in organisation after organisation that initially said it was impossible: the banks at Canary Wharf, hospitals, schools and universities; the companies which built the 2012 Olympic Park, and everyone who worked on the Games; Premier League football clubs, and now the first High Street retailers. 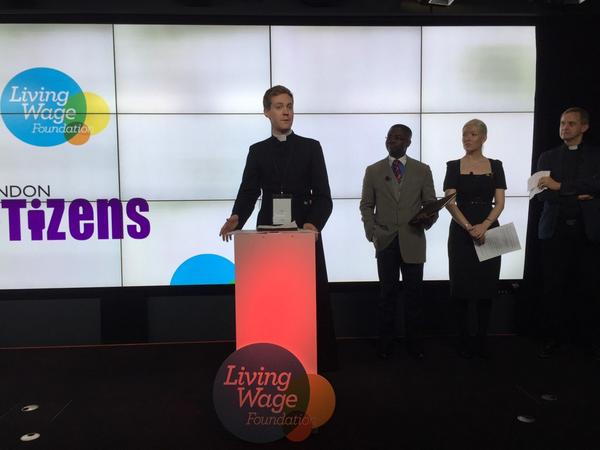 This week, Aldi joined Lidl as Living Wage employers. This follows over a year of action by Citizens UK in the retail sector. If the lowest-price retailers are going Living Wage, surely companies like John Lewis, M&S, Tesco and Sainsburys will have to follow suit?

CTC has produced a special guide for churches, to help them celebrate Living Wage week. It contains lots of material on the theological basis for Christian action on the issue, and suggests the following practical actions:

1. Preach on the Living Wage: The notes contain a commentary on the readings for Sunday 1st November  – along with other Biblical passages referring to the Living Wage.

2. Get testimony from low-paid workers in your congregation: There is no substitute for personal experience. Story is the main genre of Scripture, and has always been central to the success of the Living Wage Campaign. Is someone in your church willing to speak or be interviewed about life on poverty wages, or the positive impact of the Living Wage? Alternatively, a member of your congregation – or a community organiser from Citizens UK – could speak or be interviewed about the stories behind the campaign, and how it has succeeded.

3. Say ‘thank you’ to a Living Wage employer: Community organising involves tension and struggle, but we also recognise and celebrates success. Some employers who were once resistant to the Living Wage have now become powerful voices for its positive impact. Contact your local Citizens UK organiser and find out which local employers your congregation can thank. This can be by sending a letter on behalf of the church, or even getting members of the congregation to write a ‘thank you’ postcard. Experience suggests this can be done most effectively, and quite speedily, while the congregation is still together. Why not distribute postcards – and supply some pens – during the notices? You can collect the cards in and post them in one batch. 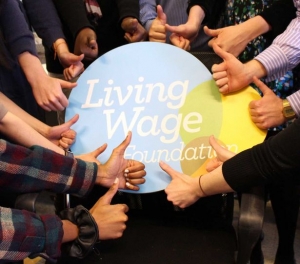 4. Map low pay in your community: Think of appropriate ways to engage your congregation in this research, making it as conversation-based as possible. After all, we are keen to build relationships as we go! It could be part of a wider conversation about the impact of the economic crisis on your neighbourhood. Find out whether your local council is paying the Living Wage. If so, say ‘thank you.’ If not, ask ‘why not?’

5. Take part in a Living Wage action: Despite the success of the Living Wage Campaign, there are still too many families who suffer as a result of low pay. The campaign must continue to persuade, encourage and sometimes embarrass employers to do the right thing and pay the Living Wage. There are plenty of opportunities to do this! Here are some ideas…

Let us know how celebrating Living Wage week in your church goes by writing to us at hello@theology-centre.org!