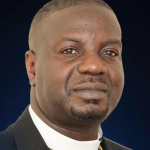 Each year, one of CTC’s staff or partner church leaders preaches the Jellicoe Sermon at Magdalen College, Oxford – a chance to engage a new generation of students in inner-city ministry. This year’s sermon was given by Bishop Moses Owusu-Sekyere, who is also preaching at the CTC Celebration on 28 October!

“We come here today to honour the legacy of Father Basil Jellicoe, Magdalen’s Missioner to Somers Town in the 1920s. Born privileged, on 5th February 1899, Fr Basil studied at Magdalen College, Oxford, before training for the priesthood at St Stephen’s House. Jellicoe regarded the state of his parishioners’ housing as disgraceful and employed his sermons to address this. He is said to have described the slums as ‘an outward and visible sign of an inward and spiritual disgrace.’

What did he do about it?

He toured the country in his small car fundraising and selling loan stock to fund more befitting housing projects. He gained the support of the Prince of Wales, the Archbishop of Canterbury and the Housing Minister in the St Pancras House Improvement Society. In this venture and became the founder of the St Pancras Housing Association and several other housing associations in London, Sussex and Cornwall.

The posters Fr Michael has put out this year show how through fundraising, demolition and visionary rebuilding, Jellicoe transformed the slums and created a better world for his parishioners. 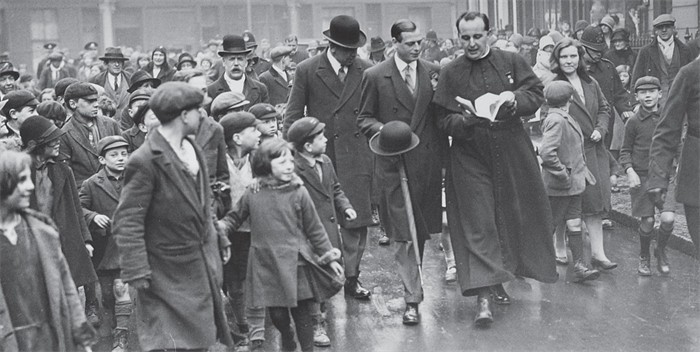 As we honour the legacy of Basil Jellicoe today, I would like us to consider how we, like Fr Basil Jellicoe, can respond to the challenges of our day, drawing inspiration from a key Biblical character – David.

Psalm 11 presents an instance in which law, order and the moral foundations of the Jewish community had degenerated, almost into a state of disrepair. No allusion enables us to assign this Psalm to any particular occasion, however it is largely believed that it refers to the period of David’s stay in the court of  Saul, when Saul became enraged by the successes of David seeks to take David’s life.

David’s friends and companions, who had lost heart ill-advised him, saying:

1. Flee to your Mountain (in other words just secure yourself, no point fighting for others)

2. The wicked bend their bow and make ready their arrow upon the string (it is too dangerous, too costly, don’t risk your life)

3. If the foundations are being destroyed, what can the righteous do? (It is too late, and not worth the effort, the society is already beyond hope)

But look at David’s response! Rather than fleeing, David responds, ‘why say ye flee to the mountains?’

Ladies and gentlemen, your mountain will provide no security when others have no mountains to flee to. David thinks about the collective good and how the degenerating foundations of society could be restored.

The questions we want to reflect on, on this occasion are:

We are grateful to God for the Centre for Theology and Community – an organisation that mobilises Churches to take action in their communities. The foundations of society are quickly eroding, I pray that God will raise many more Basil Jellicoes from this great University, people who will leave their indelible footprints in the sands of time.

The world today presents many challenges. What can the righteous do? We can better our world by touching the lives of people in our communities.

In closing I would like to share a story I constantly draw inspiration from. A father gave his little boy a jigsaw puzzle of the map of the world to put together. The little lad went into his bedroom and returned a few minutes later, to the surprise of his dad, having ‘put the world together’. His surprised dad enquired how he had managed to complete the task that quickly. He explained, that he had accidentally flipped over a number of the puzzles and found parts of a man behind each puzzle. He therefore decided to fix the man behind the world, and when he turned the jigsaw puzzle over, the world was fixed.

Ladies and Gentlemen, if we fix the men behind the world, our world will be fixed, this is what the righteous can do. God bless you.”