This week saw the first rehearsal of one of the programme’s first projects – the ‘Cantignorus Chorus’.

In this blog he tells us more…

This week, I had the honour of directing the most exciting choir I’ve ever worked with. On Wednesday evening, St. Paul’s West Hackney was host to the first rehearsal of the ‘Cantignorus Chorus’ – a choir formed from the charities which use the church hall throughout the week. These groups work with some of the country’s most marginalised people.

An astonishing 55 people showed up for the first rehearsal The were clients and staff from North London Action for the Homeless, Narcotics Anonymous, Open Doors charity for vulnerable women, 4Sight lunch club for local West Indians with mental health issues, an over-50s dance group, Family Mosaic Housing Association, Growing Communities grassroots gardening project – not to mention members of the church congregation and the wider local community.

The ‘Cantignorus Chorus’ is the outcome of flourishing relationships between church and community, and realises a vision held by the Rector of St Paul’s, Revd Niall Weir. The choir is a celebration of Hackney’s diversity; it recognises the fact that life can be difficult for all of us – regardless of our circumstance. This theme is strongly reflected in the song we’re seeking to learn and record, ‘Holding out a helping hand to you’, written by Niall himself. 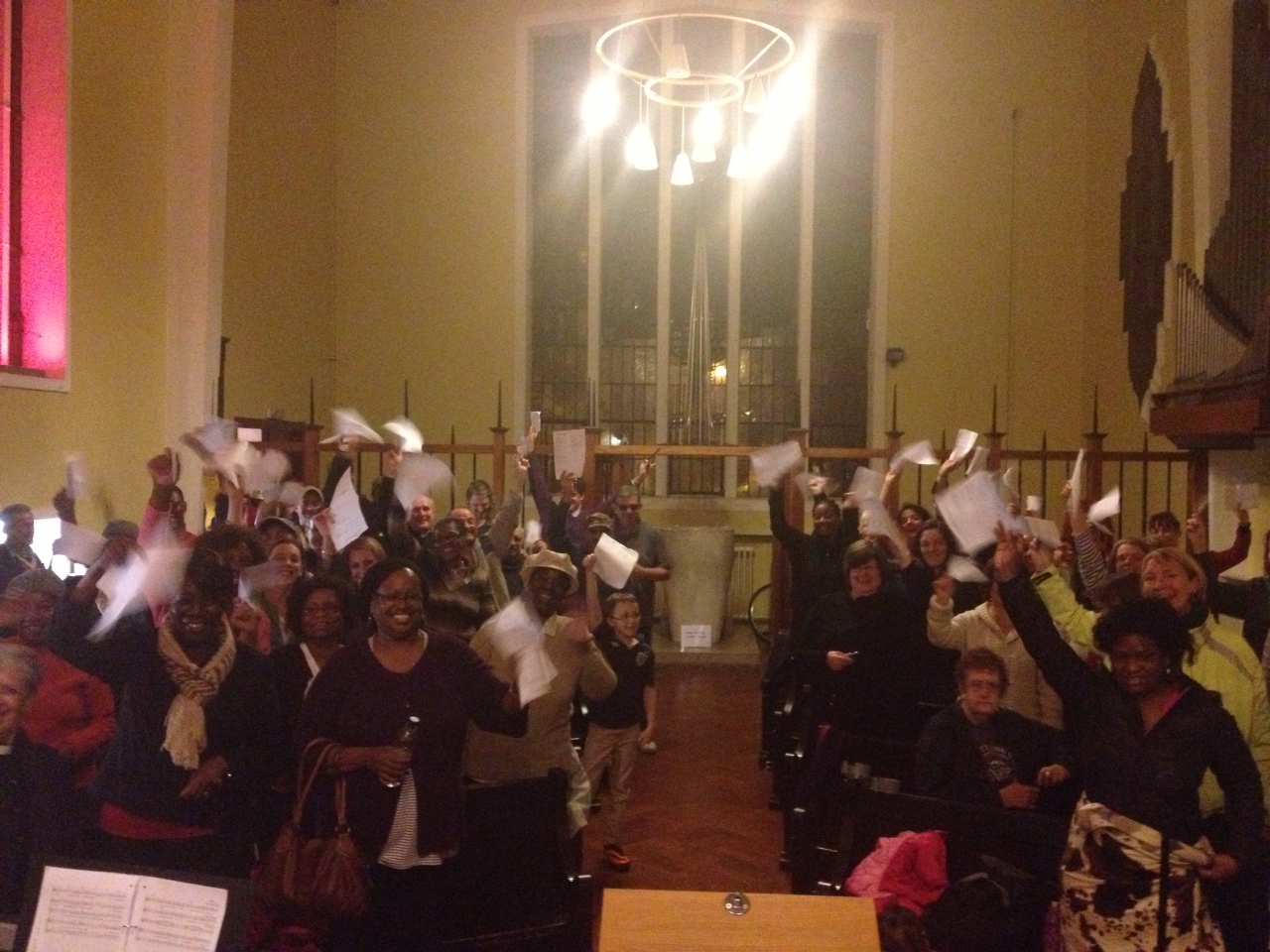 This is SingSpire’s flagship project, which has involved months of planning – musical and relational. SingSpire recognises the importance, when working at the grassroots, of relationship-building. With this in mind, and by appealing to the church’s wealth of connections, it was not an arduous task to gather such a diverse selection of people.

We are building on the work of many of the groups involved. For example, a group of five ladies, mostly from the same housing block for the elderly, decided to get together and knit each Wednesday. There, they soon discovered a love for singing, and so formed a ‘knitting choir’. The group leader was delighted for her flock to be asked to join the ‘Cantignorus Chorus’.

Gradually, the room filled with more and more interesting people, from every walk of life, who approached with a nervous excitement. At 7 o’clock, a warm introduction was given, highlighting the diversity in the room, why we were here, and what I was expecting of them! There was a buzz about the room. Within the first 5 minutes, the church was filled was glorious 3-part harmony, which blew me (and the singers) away. Thus commenced the best rehearsal I’ve ever been part of.

Many things surprised me about the rehearsal: the wonderful range of people and of life scenarios in the room; the pure joy which came through singing together; the utter dedication from everyone to try their best; the respect the group had for me as well as for each other; and their willingness to come back next week and give it their all once more.

Soon, I’ll begin a series of workshops in nearby Shacklewell Primary School – teaching the song to 60 children who otherwise do no singing. Watch this space!

4 Responses to Introducing… The Cantignorus Chorus!