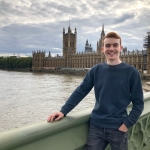 Applications for the 2021-22 Buxton Leadership Programme are open until 26 April. One of this year’s participants, Josh Price, blogs on his experience of the programme.

For me, there were three immediate attractions to the Buxton Leadership Programme.  First, I was tired of hearing hands-tied, party political-answers to straight forward questions on breakfast politics programmes. I wanted to discover if honesty and integrity could prevail in Westminster. Second, I loved the idea of stepping out from Church, building relationships with neighbours, and seeing practical change first-hand. And third, I didn’t know what to do long-term and was drawn towards an opportunity to really explore what God might be calling me into.

In my Parliamentary placement, I’ve been working alongside Tim Farron MP and the Liberal Democrats. Through St. Mary’s Walthamstow, I’ve seen the first fruits of Community Organising campaigns centred on the climate crisis, racial justice, and parking mayhem.

Although I’ve tried and developed many new skills this year – writing Parliamentary speeches and Early Day Motions, crafting listening campaigns, managing an MP’s diary, tailoring one-to-one conversations – the lessons and reflections which will stick with me for life are those which aren’t easily summarised on a CV.

Politics shouldn’t weigh us down.

Timothy Keller, in Generous Justice, writes, “If a person has grasped the meaning of God’s grace in his heart, he will do justice”. Wanting to fix injustice is the natural overflow of God’s love for us.

In a Buxton Programme seminar with Dr. Anna Rowlands, a member of the six-person panel which presented Pope Francis’ recent encyclical ‘Fratelli Tutti’,  we discussed how, unpruned, this intrinsic Christian desire can make us feel lost and confused. Faced by the scale of the world’s shortcomings, we feel a weighty responsibility to fix everything. And we question if we’re on a path to achieve that:

What if I worked for the United Nations?

Maybe I could be an MP.

Do I need a Masters?

Maybe I need to learn Arabic

The Buxton Programme is named after Sir Thomas Fowell Buxton, William Wilberforce’s successor as leader of the slavery abolition movement in Parliament. Christians often look to Wilberforce as an example of how to put faith in action through politics, and Wilberforce said this: “God Almighty has set before me two Great Objects: the suppression of the Slave Trade and the Reformation of Manners.”

Two things. That’s it? I think I could handle two things. Maybe God isn’t expecting me to heal the world of all its problems individually. Phew, that’s liberating.

What’s in my hand?

You may think ‘yes, but those are two fairly HUGE things’. Well, you’re right. But William Wilberforce was an MP prior to becoming a Christian and receiving this commission. Likewise, in Exodus, Moses told God that he’s picked the wrong guy to lead the Israelites out of Egypt – ‘How could I do that?!’

God asked Moses, “What’s in your hand?”. A shepherd’s staff. The most ordinary, common thing…an embellished stick. A stick which led the Israelites out of Egypt.

We often convince ourselves we’re not cut out for the fight. We need to have better qualifications, to have taken a different path. But the question the Buxton Programme has taught me to ask is not ‘what don’t I have?’, it’s ‘what’s in my hand?’

Community Organising encourages similar questions. Where does our power lie? Who do we have relationships with? We only pursue campaigns which we believe have a genuine chance of winning. Big problems are broken down into smaller issues and tailored to the resources, relationships, skillsets, and self-interests of the community.

In Walthamstow, we broke the big problem of racial justice into the smaller issue of ethnic minority representation. Our listening campaign brought up discussions about representation in football management, a hugely important issue but one beyond our current capacity to affect. What we did have was several artists, a borough famed for creative industries, and a community left frustrated by a new mural painted by the Council.

From this anger, ‘We Are Walthamstow’ – a team working to create a constantly changing community mural to display the stories of friends and family members who are often underrepresented – was born.

With people, not just for them.

When I applied for the Buxton Programme, I hadn’t fully understood what Community Organising was. I assumed it was a Church-led response which provides a service for the community to plug a gap left by people in power: starting up a parent-toddler group, a language café for refugees, or an after-school football club.

But Community Organising crafts actions with people, abandons preconceived ideas, lets the shared interests of local people drive the approach, and calls for a response from the powerholders.

In February, a resident from the estate opposite St. Mary’s phoned, exasperated that the Council had surrounded their homes with double yellow lines, towed their vehicles, and forced them into Pay & Display zones. It was extremely uplifting to hear that they trusted the Church, our network of institutions, and realised they would be stronger with the whole of Walthamstow in their corner.

It’s not difficult to get out of bed for campaigns like this. They’re always exciting because, emerging from strong listening campaigns, I know that it’s what the community wants to be doing. When I look around Westminster, it’s obvious that the most effective politicians and policymakers are those who also realise the importance of listening.

I cannot recommend applying to the Buxton Programme enough. It is an incredible opportunity to gauge which aspects of public life motivate and inspire you, to discern where God may be inviting you to go, and to pursue political change from all angles.