Our Faith in Public Life Officer, David Barclay, blogs for us about one Tower Hamlets church which is thriving in a multicultural context…

If you’re having a debate about whether multiculturalism has failed in Britain, it’s usually not long until Tower Hamlets makes an appearance in the conversation. With rapid gentrification, political corruption and the recent tragedy of schoolgirls joining ISIS in Syria, the east London borough appears to be a microcosm of all the unease that modern Britain feels with itself. Against such a backdrop, it’s easy to lose hope that different religious and ethnic groups can truly forge a common life together.

And so it was a refreshing joy to be present recently at an event which spoke powerfully of the possibility of diverse heritages and beliefs coming together for the common good. The event itself was hardly momentous – the opening of a renovated set of gates at St Peter’s, Bethnal Green. But what made it unusual was that the new gates had been designed by Year 10 schoolchildren from the nearby Oaklands School, a secular organisation with a predominantly Muslim student body. The dozen young people who had worked together on the designs were all present at the gates’ opening, rightly proud of their hard work which was to leave a permanent mark on their local community – as their head teacher Patrice Canavan pointed out, every time they walk down this road they can now think to themselves “I helped make that.” 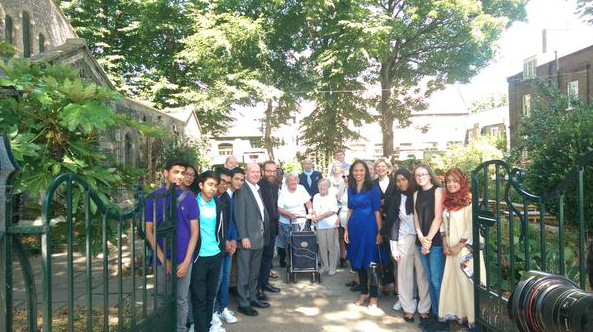 But it wasn’t only their Head Teacher who was there to give the students and the Church the recognition they both deserved. Rushanara Ali the local MP, and John Biggs the recently elected Mayor of Tower Hamlets were both visibly pleased to be in attendance, as were a number of members of the congregation and several older residents of the local estate. And so the event was one of those rare occasions where all aspects of a community were present and involved – young and old, white, black and Bengali, Christian, Muslim and atheist. What made it even more remarkable was that nobody felt embarrassed or self-conscious of any of these differences. The Vicar of St Peter’s, The Revd Adam Atkinson confidently proclaimed that the primary purpose of the church was to worship God, but that it was also there as a community asset. This multi-layered focus is encapsulated in the St Peter’s catchphrase – “worship God, make friends, change the world.”

How had such a vibrant, positive and diverse event been possible? In my 2013 Theos report Making Multiculturalism Work I identified several key features which could all be identified in this gate renewal project. The first is the importance of working together and not simply focussing on ‘dialogue’ as the means to integration. These schoolchildren could have had a discussion about the local church and what Christians believe. They might even have visited the church and learned first-hand about its heritage. But how much more engaging and interesting that they could practically play their part in its ongoing renewal! And how much more inspiring for the 80+ year-old local ladies, so often seeing their community changed for the worse by forces beyond their control, to witness young people contributing something positive to the local landscape.

The second feature that I identified was an openness to core motivations, particularly relating to faith. As the new gates were unveiled it was explained that the design contained elements that represented the school, alongside classic Christian symbols and words from Psalm 24 (‘Lift up your heads, ye gates, that the King of Glory may come in.’) Here praise must be given both to the church and to the school. It would have been so easy for the church to feel obliged to dumb down any particularly Christian content, or for the school to refuse to engage with this project for fear of offending students or parents who don’t subscribe to the Christian faith. That both sides felt confident enough to express their deep identities and yet to work together is a brilliant model for others to follow when seeking to make relationships across diversity.

So as the new gates swung open for the first time it was difficult not to hope that this kind of project might just unlock many more similar examples of creative and confident community leaders finding ways to collaborate across the many dividing lines of a multicultural area. I hope too that if this example were followed then one day Tower Hamlets might become a byword for a Britain more comfortable and confident in its own diverse identity than it is today.