Our Development Director, Tim Thorlby, blogs on Christmas, housing, and how you can help us change the world…

“Christmas is built upon a beautiful and intentional paradox; that the birth of the homeless should be celebrated in every home.” G.K. Chesterton

Christmas is traditionally a time of generosity. Even Scrooge eventually got the hang of it. As families and friends gather together to celebrate, we are encouraged to think of those who may not be so fortunate. Homelessness in particular resonates at Christmas. As GK Chesterton observed, this is not just because it’s hard to celebrate Christmas without a home, but because Jesus himself was born without one.

The Nativity is such a familiar scene that it can be easy to overlook the hardness that is present within it. A country under military occupation. A teenage mother giving birth, for the first time, miles from home. Insecurity, and eventually forced migration to another country to save their child.

And yet these difficult events give us the very reason why Christmas is so worth celebrating.

As God injects himself into human history – in a real place, with real people who have real problems – we are introduced to a God who now walks alongside us and shares it with us (“the Word became flesh”). But more than this, we are introduced to a God who is able to renew this hard, broken world. This is the hope worth celebrating at Christmas – that God not only understands our situation but is now bringing in a Kingdom where the broken-hearted will be healed and the blind will see. And it is the incarnation of God – born in a stable – which gives Christmas its power – proof that God is willing, present and able. After all, hope without power is just wishful thinking. 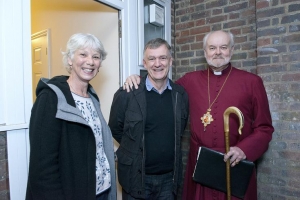 The Bishop of London welcomes residents of our first missional house – Steve and Michelle.

With this in mind, what can we say about homelessness at Christmas? In London today, housing and homelessness are real and difficult problems. Thousands of people will spend Christmas living on the streets, tens of thousands live in temporary accommodation, hundreds of thousands live in crowded or inadequate housing. Millions more are affected by insane house prices.

But we are not hopeless. Many churches will be opening their doors this Christmas as winter night shelters. Many more will make generous donations to housing charities. Some will be campaigning for change – tackling the causes of the problem – through traditional political lobbying and, increasingly, community organising.

And we can also get involved in providing affordable housing directly.

This latter area is where the London Missional Housing Bond comes in. As one response to the housing problems in London – which affects the Church as much as anyone else – we now have a way of providing affordable housing to at least some low-income workers.

After a successful pilot in 2013, the second Bond was recently launched by the Bishop of London. Investments are now coming in. Individuals, churches and charities can invest small amounts of money in the Bond, for 3 or 5 years, and it is used to purchase housing and provide low-cost rented housing for missional workers.

At this Christmas time, we ask you to consider getting involved too. It is a very different ‘ask’ from most you will receive at Christmas – we don’t seek donations, but rather to borrow money. You will get it all back. This is not about the money you give away, this is about the money you keep for the rest of the year. This is the money that sits around not doing much all year long. And the Bond pays a rate of interest – up to 2% – more than most deposit accounts.

The Housing Bond is a rare thing – a Christian social investment. It’s our attempt at an incarnational initiative, an act of hope in the face of a significant challenge. By joining in, you expand what is possible and make this act of hope a more powerful initiative for change.

For more information on the Housing Bond and the partnership which is promoting it please go to the website.