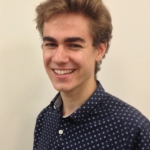 A crowd had gathered in the hall of St John’s, Hoxton to watch a special presentation as part of the church’s harvest shared lunch. Our special guest was addressed by Vera, a member of the congregation: “In light of your success in the Hackney Game of Thrones, we want to present you with a throne of your own”.

Dressed as a knight, seven-year-old Lewis emerged to present Phil Glanville (the newly elected mayor of Hackney) with the aforementioned throne. It was a fetching toilet seat. Amidst applause and laughter, a slightly bemused mayor posed with Lewis for photographs. 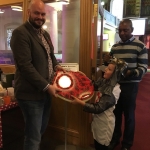 Photos taken and tweeted, Peter (another leader in the church’s organising work) explained to the mayor the meaning of our gift. Adorned with red roses – for a Labour mayor, obviously – the toilet seat was to serve as a reminder of the church’s ongoing campaign for public toilets in Shoreditch Park. As the council was exploring building a school on the park – along with flats to fund it- the seat also represented our commitment to being involved in any future proposals to develop the park. Would Mayor Glanville help us set up a meeting with the project team where we could share our agenda for the development of the park? The mayor was happy to oblige, expressing his support for our toilet campaign, and committing to working with the church and Hackney Citizens to involve Hoxton residents in the plans. Success! He also paid tribute to the church’s involvement in community organising and its wider work. Then we had lunch and there were more selfies.

I had only been working in St John’s for a month at that stage so it was my first time seeing the church interacting with an elected official. I was struck by how warm the relationship was. Our invitation for the mayor to come to the lunch had taken the form of a card, signed by members of the congregation thanking him for being their councillor, assuring him of their prayers, and looking forward to working with him in his new role. The event is a clear example of the relational power that community organising seeks to build. It is in these moments – marked by mutual respect and pragmatism, by young knights and bring-and-share lunches – that you see that on some occasions everyone can emerge from a situation more powerful, more able to act. We had been heard and had received a clear commitment to a meeting. Mayor Phil Glanville had gained allies in putting forward the positive case for the development of Shoreditch Park and in the ongoing process of learning what Hoxton residents want from it. (Furthermore, as it turned out, he actually needed a new toilet seat.)

Now that we have an agreement to a meeting, we will conduct a listening campaign to find out what members of the institutions around Hoxton want from the development of Shoreditch Park. We will then bring our agenda to the council. This will form part of a larger project to establish Hoxton Citizens, a micro-organising chapter within Hackney Citizens, campaigning on local issues. St John’s has been involved in organising for several years and is a key institution within Hackney Citizens. Along with helping build Hoxton Citizens, my year with St John’s will focus on building an internal team to lead and further develop the church’s involvement in organising, guided by CTC’s Seven Hallmarks of an Organised Church. So it was encouraging to see organising veterans and newcomers alike involved in our toilet seat action. With new institutions joining Hackney Citizens and Phil Glanville committed to being “a Hoxton mayor”, it is an exciting time for civil society in Hoxton. And it is wonderful to see churches at the heart of the action.