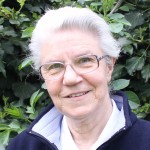 Here we share a beautiful short Eastertide reflection from the Assumptionist order in France which has been translated by our Chaplain, Sr Josephine Canny – herself an Assumptionist…

Mary Magdalen ran. Peter ran. The other disciple ran. The stone rolled back from the empty tomb caused everyone to run. “We dont know where they have put Him.” The question is posed and the mystery remains. The gospels tell us nothing of the actual moment of Resurrection. They only report the experience of men and women who had followed Jesus, and had discovered that all did not finish at the cross and the tomb.

Peter runs to the tomb. He is not alone. There are two of them – as if Peter invites us to join in this race to the tomb on the morning of Easter. The other disciple “sees and believes”- what the disciples had not understood but finally understand – their eyes are opened and they recognise Him.

Like Peter and with Peter we are invited to “run to the tomb.” But we must also cross the threshold of the empty tomb so that, with Christ, we pass resolutely into a new life… leaving behind our darkness and believing in our own resurrection which has already begun today – this is what the Resurrection calls us to. We have risen with Christ.