On Friday, the Mayor of London announced a new programme of small housing developments on ten sites across the capital – all of them owned by Transport for London. 111 houses are to be built, and 76 of them will be affordable.

One of those sites is just two minutes’ walk from St George-in-the-East church. It’s easily the largest and most lucrative site – and yet all of the 42 homes to be built there will be affordable for local people. They won’t just be “affordable” Iin name – and they won’t just be “affordable” until those living in them sell them on at a huge profit. Because the development will be a Community Land Trust (CLT), they will be affordable for ever.

How has this come about?

The answer is one dear to the heart of this Centre: this has come about through community organising rooted in theological reflection and prayer.

Our Centre grew out of the work of east London churches who found that the practices organising helped them to become stronger and more faithful witnesses to Christ – growing in number and depth of discipleship, and acting with their neighbours to transform their communities.

In 2015, the Centre entered into a partnership with the parish of St George-in-the-East, to renew its life and mission through these same practices. The last three years have borne out our “both/and” vision of Christian mission. The Sunday congregation has more than trebled, new midweek congregations have been planted, and relationships with our Muslim neighbours have been deepened, as we have worked together to challenge injustice and help those in need. 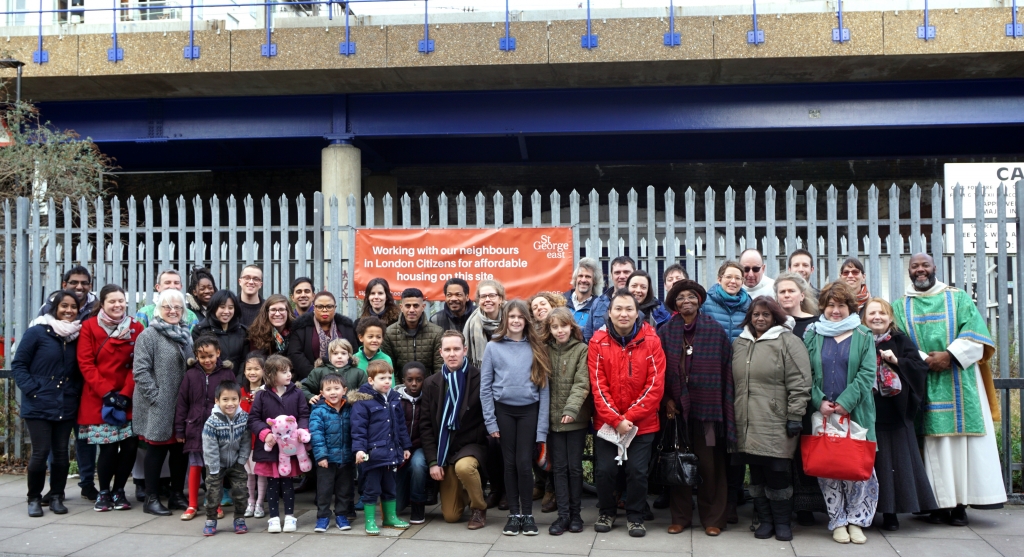 Above: Worshippers processed to the CLT site yesterday after the Parish Eucharist, to give thanks for the campaign’s success.

It was in April 2016 that our congregation had its first experience of a community organising assembly – joining 6000 other Londoners to secure commitments from the Mayoral candidates on affordable housing. These included a pledge to deliver 1000 CLT homes by 2020.

As well as being the main issue at the London-wide gathering, housing topped the list of concerns at a community organising assembly which was held in St George’s the following month – with members of local churches, mosques and schools. In June 2016, local people went on a Walk for Affordable Housing – and identified a large, unsightly piece of land just minutes from the church. After some research, it emerges that this land was the “jewel in the crown” of Transport for London’s (TfL) Small Sites Programme, and was likely to be sold off for luxury housing.

Over the next eighteen months, local people worked together to build support for a Community Land Trust on the site. 2017 was a busy year for the campaign – and for Claire Moll and then Miriam Brittenden (members of the Community of St George trained in organising) who built and co-ordinated the action team. In Holy Week, St George’s Palm Sunday procession stopped at the site to pray for the campaign. In June, a packed assembly (chaired by Fr Richard from St George’s and Khoyrul Shaheed from Darul Ummah Mosque) persuaded Tower Hamlets Mayor John Biggs to back the plan for a CLT. In October, the campaign got into the local press as St George’s congregation processed to the site after the Parish Eucharist. And then, in December, children from the school recorded a Christmas video with testimony explaining why affordable housing mattered to them and their families.

Over the next eighteen month, tenders will be awarded and builders will move onto the site. Over 100 local people will win affordable, good quality housing – and many thousands more will see evidence of the power of community organising when it is rooted in prayer.

Who knows where that will lead?